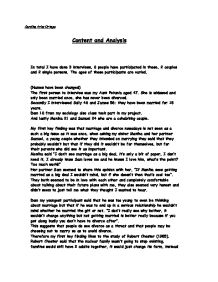 Carolina Arias Ortega Content and Analysis In total I have done 3 interviews, 6 people have participated in these, 2 couples and 2 single persons. The ages of these participants are varied. (Names have been changed) The first person to interview was my Aunt Petunia aged 47. She is widowed and only been married once, she has never been divorced. Secondly I interviewed Sally 46 and James 56; they have been married for 18 years. Dom 16 from my sociology also class took part in my project. And lastly Monika 21 and Samuel 24 who are a cohabiting couple. My first key finding was that marriage and divorce nowadays is not seen as a such a big issue as it was once, when asking my sister Monika and her partner Samuel, a young couple whether they intended on marrying they said that they probably wouldn't but that if they did it wouldn't be for themselves, but for their parents who did see it as important. Monika said "I don't see marriage as a big deal, it's only a bit of paper, I don't need it, I already know Sam loves me and he knows I love him, what's the point? Too much work!!" Her partner Sam seemed to share this opinion with her, "If Monika sees getting married as a big deal I wouldn't mind, but if she doesn't then that's cool too". ...read more.

Sam, from the cohabiting couple said "the only reason we're with each other now is out of love, and if I were to get married I would have to be in love, but whatever, if she wants it we will, if not we wont, it won't change anything, for me it's not a priority" This suggests that because love is now more of a priority in relationships divorce is more common and acceptable, because if love doesn't last people want to move on. This makes me agree with what functionalists Ronald Fletcher and Talcott Parsons say, they believe that people expect more from marriages nowadays, therefore they would consider divorcing more if things don't work out as expected. Ronald Fletcher says that people are not rejecting the idea of marriage, they are just expecting more from their relationships. My third key finding is that people DO think that divorces can affect your mental health, whether it is in a positive or negative way. Dom my youngest participant told me that his parents are divorced, he told me that it has affected him badly although he has gotten used to the situation now. His parents divorce occurred when he was only 13 as they were always fighting, he said to me that it did affect him in a negative way, he rebelled against his mother as it was her who had wanted the divorce therefore ...read more.

She said all this despite her religion. James didn't seem too keen on this, he said that it was "all a bunch of *******" and that women wanted too much freedom, he also said that women were too liberal in these times and how things were so much better before. Petunia also thought that the reason for more divorce was the changing role of women, she told me that although when her husband was alive she depended on him that once he had passed away she became completely independent. She told me about how she used to be scared as she didn't have any qualifications and had never worked in her life and then amazed at how easy making her own money and decisions had been. "Before when I was younger I used to think about how great being a man must be as they were in charge, now I love being a woman." Feminists such as Barrett, McIntosh and Sylvia Walby mostly disagree with my findings as they believe that we still live in a male dominated world, my participants all agreed that rights are equal now, whether this is true or not I cannot say. The older respondents seemed to suggest that if women's roles had been equal to men's when they were younger they would have had more opportunity to divorce. ...read more.