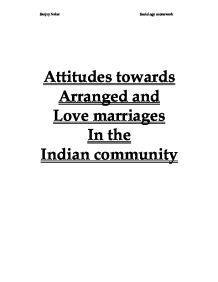 I added "other" because people may be separated or engaged etc. Question 3 has also been changed. I decreased the age gap between the choices to give me more of a feeling about the age groups because if it was left as 18 - 30 then there would be a 12 year age gap and I wouldn't no approximately how old the interviewee could be. Question 4 was kept the same. Question 5, I gave options of how long they has been married, but people might have been married for much longer than 11 years, for example 20years and I would not know as I have not put an option there, for them 2 write how long they have been married. In question 6 I put an option for good and bad but did not have an option for "both" or "don't know". I think this was inappropriate so I have altered that. Question 7 was kept the same. Question 8 was also kept the same but without giving a reason to say why they quoted this for a particular question. This is the main mistake I made on my questionnaire. Question 9 was also kept the same. With an exception of question 8, I think my questions were relevant to all my hypotheses. This questionnaire is my actual one (main survey): Justification 1: Male ? ...read more.

I have to spend some months with the guy before tying the knot." she says. Anup Malhotra says "I do not believe in the concept of arranged marriages. I mean, how on earth can you choose your life partner in two or three meetings. Marriages cannot be arranged, they will just happen." Secondary analysis "Ask youngsters if they would prefer a love marriage or an arranged one and you are mostly likely to get `love marriage' as the answer. Most teenagers will tell you arranged marriage is old fashioned." - This statement proves that love marriage is more common than arranged. This is my first hypothesis. My second hypothesis is also proved correct with my "social aspects" reseacrch in the secondary data that I have collected. The paragragh is above. "Arranged marriage was common in many countries until the 19th century, and is still practiced in some lands, but an increasing number of young people today refuse arranged marriage." With increasing interaction between boys and girls and change in family outlook aided by information technology, the popularity of love marriages is on the rise - The statement above proves my third hypothesis correct. This is a saying that I have research over the internet. I will be giving the websites that I used to researched this in the bibliography. Some of the other statements in my secondary data also prove this hypothesis correct. Data presentation This section of my coursework shows the data I have collected from the questionnaires in different methods, such as different graphs. ...read more.