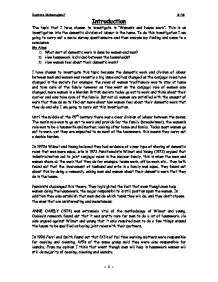 Introduction The topic that I have chosen to investigate is "Women's and house work". This is an investigation into the domestic division of labour in the home. To do this investigation I am going to carry out a social survey questionnaire and than analyse my finding and come to a conclusion My Aims: 1) What sort of domestic work is done by women and man? 2) How housework is divided between the households? 3) How woman feel about their domestic work? I have chosen to investigate this topic because the domestic work and division of labour between men and women was recently a big issue and has changed as the conjugal roles have changed in the society for example: the roles of woman traditionally was to stay at home and take care of the family however as time went on the conjugal role of women also changed, more woman in a Morden British society today go out to work and think about their carrier and also take care of the family. But not all women are satisfied with the amount of work that they do so to find out more about how woman feel about their domestic work that they do and why I am going to carry out this investigation. Until the middle of the 20th century there was a clear division of labour between the sexes. The man's role was to go out to work and provide for the family (breadwinner), the women's role was to be a housewife and mother, looking after home and family. Today most women go out to work, yet they are expected to so most of the housework, this means they carry out a double burden. In 1970s Wilmot and Young believed they had evidence of a new type of sharing of domestic roles that was more equal, late in 1973 Functionalists Wilmot and Young (1973) ...read more.

This graph tell me that I have served 10 male and 10 female, it also inform which gender does what so of work in the next questions. Aim 1: What sort of domestic work is done by women and man? Question 3 helps me to answer my first aim as this question is asking about what kind of work is done by the respondents, the way this question is related to my first aim is that in this aim I am trying to find out what sort of work is done by the men and women and this question is also asking about the sort of housework the husband and wives do. From the graph I found out that the wives (woman) do more of the house related work which we would expect the women to do, for example cooking, cleaning, washing dishes, cloths and dusting where as the mans do more of the physical work such as gardening, washing cars etc.. And the husband also takes care of the financial based work, related to money as they are more aware of how to deal with such kinds. However the husband and wife also share some work between them such as ironing, vacuuming, shopping for groceries and dusting in the house. My result from the question related to the first aim agrees with the theory of ANNE OAKLEY as she argued that it only required men to do a few things around the house to be qualified, we can see from the graph that women did more house work compare to men. Wilmot and Young theory also agrees with this as they said that the division do labour was more equal, this is also shown in the graph as there are quit a lot of things in the house which women and men both share between that are related to house work such as ironing, vacuuming, shopping for groceries etc... ...read more.

type of method was quite successful to use as there was no bias taking place, there are many advantages of using this method for example; less cost, I can do a large number of respondent at the same time, if I am not satisfied with the data I collected than I can redo it however there were also some disadvantages such as low respondent rate-people may not return questionnaire. Strengths: There are many strength of using social survey as a method for doing an investigation such as the same questions are given to all the respondents therefore I can easily compare my results. The results I get back from this type of method are reliable because the investigation can be repeated and I can get the same results again, another strength is that by using a self completion questionnaire it reduce bias as there are no verbal or visual to influence the respondent's opinions as a result I know that the investigation was valid. Weaknesses The biggest weakness that could have biased my investigation was if the respondent didn't understand the question than it is more likely that the respondent may give me a different answer to what I was looking for therefore my results may not be valid or reliable, to make this situation more reliable I could have stated the question in a way which is not biased so I get the answer which I am looking for and not what I get. Also because while doing a self completion questionnaire there is a risk of not every one completing the questionnaire and returning it back. Some people do not have time to do the questionnaire therefore they don't do it, so if I sent it to 10 men and 10 women and if I only get 8 men's and 4 women's responses back, my results will not be reliable or valid. Bibliography Bibliography is a list of materials (books, articles, videos, etc.) on a particular subject or by a particular author. ...read more.