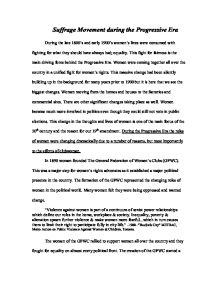 Suffrage movement during the progressive era.

Suffrage Movement during the Progressive Era During the late 1800's and early 1900's women's lives were consumed with fighting for what they should have always had; equality. This fight for fairness is the main driving force behind the Progressive Era. Women were coming together all over the country in a unified fight for women's rights. This massive change had been silently building up in the background for many years prior to 1900 but it is here that we see the biggest changes. Women moving from the homes and houses to the factories and commercial sites. There are other significant changes taking place as well. Women became much more involved in politics even though they could still not vote in public elections. This change in the thoughts and lives of women is one of the main focus of the 20th century and the reason for our 19th amendment. During the Progressive Era the roles of women were changing dramatically due to a number of reasons, but most importantly to the efforts of clubwomen. In 1890 women founded The General Federation of Women's Clubs (GFWC). This was a major step for women's rights advocates as it established a major political presence in the country. The formation of the GFWC represented the changing roles of women in the political world. Many women felt they were being oppressed and wanted change. ...read more.

Women were also restricted from voting. Their input was unimportant in both national and even local elections and this made them angry. Women could not hold public offices and were, for the most part, restricted from seizing any adequate amount of power. At the time many men believed women should not hold any power and that they were unsuited for work outside the home. This belief was so strong in certain areas that women had even believed it for a time. Soon women began to become educated. Many colleges were beginning to allow women, both black and white, to attend. Reasons include financial stability, public outlook and support, but most importantly the efforts of women like Susan B. Anthony, Jane Addams, Marion Talbot, Mary Church Terrell, and a number of other courageous women. Through the suffrage movement many women were allowed to receive a higher education. Education was originally only for men but women soon fought that tradition and many colleges began to allow women into classes. Women soon began to challenge their places in society as well as their roles and both mothers and as part of the workforce. Because they stood up to the resistance slowly jobs were beginning to open up. There were many visible signs of women's changing roles. In the home they no longer looked after children as much as they used to. ...read more.

(1876 British Common Law ruling). This was overturned by the 18 Oct.1929 Person's Case. When women won, Nellie McClung said "Ladies, hang Lord Sankey's picture on the wall of the Community Rest Room with Newton Wesley Rowell's beside it, & let these names & the names of the other Lords of the Judicial Committee of the Privy Council be kept in perpetual and grateful remembrance... " The Progressive Era is known for many achievements, but most importantly for how it helped to shape the world we live in today. Women's lives have changed dramatically since the late 1800's. Women were once treated unequally both in the home and in the workplace. They were unrepresented in politics as well. Women had to face many hardships during their fight for equality and much of this fighting began during the Progressive Era (1890-1920). Both in the home and in politics the lives and lifestyles of women have greatly improved. Women who once had no voice now were becoming clubwomen and voting on behalf of their parties. Women who were once confined to the role of housewife could now begin to seek financial stability in jobs such as nursing and textiles. Women's lives were far from equal to that of men but the steps taken during the 1900's ensured that they would forever fight until that uniformity was established. There were many times when women struggled to gain equality, but none as important or as far reaching as the women's rights movement of the Progressive Era. http://www.wcc2002.asn.au/suffrage.htm ...read more.