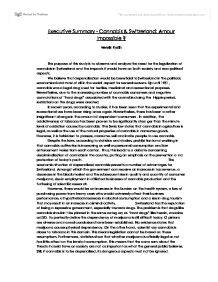 The purpose of this study is to observe and analyze the need for the legalization of cannabis in Switzerland and the impacts it would have on both society and eco-political aspects.
We believe that depenalization would be beneficial to Switzerland in the political, economical and most of all in the social aspect for several reasons. Up until 1951, cannabis was a legal drug used for textiles, medicinal and recreational purposes. Nevertheless, due to the increasing number of cannabis consumers and negative connotations of “hard drugs” associated with the cannabis during the Hippie period, restrictions on the drugs were created.
In recent years, according to studies, it has been seen that the experimental and recreational use have been rising once again. Nevertheless, there has been a rather insignificant change in the amount of dependent consumers. In addition, the addictiveness of tobacco has been proven to be significantly stronger than the minute level of addiction caused by cannabis. The Swiss law states that cannabis in agriculture is legal, as well as the use of the natural properties of cannabis in consumer goods. However, it is forbidden to possess, consume, sell and incite people to use cannabis.
Despite the laws, according to statistics and studies, prohibition is not working in that cannabis cultivation is increasing as well as personnel consumption and law enforcement varies from each canton. Thus, this leads to a debate concerning decriminalization of cannabis in the country, putting an emphasis on the prevention and protection of today’s youth.                                                                 The economic situation of depenalized cannabis presents a number of advantages for Switzerland. Amongst which the government can receive an increase in tax revenue, a decrease in the black market and the subsequent rise in quality and quantity of consumer marijuana, rise in employment in affiliated businesses of cannabis production and the furthering of scientific research.
However, there would be an increase in the burden on the health system, a loss of purchasing power from heavy users who would adversely affect their business performance, a hypothetical decrease in alcohol consumption and a rise in drug tourism that may result in an increase in criminal activity.                Switzerland has the reputation of being a repressive government, especially towards drugs. The problem is that drugs like cannabis shouldn’t be placed in the same category as “hard drugs” like heroin, cocaine or LSD.  To perfectly define the dependency of marijuana is still difficult today. Opinions are diverse and no real conclusions have been established. No evidence states that marijuana causes physical dependency. On the other hand, scientist say cannabis is closer to tobacco in this domain. This means legislation cannot be based on these assumptions. Furthermore, statistics show that whether marijuana is officially legal or not has little effect on the level of consumption. This means that the concerns about the threats it could have on society are not as important as what the general public believes. Still, if cannabis is to be depenalised, its dangerous aspects must not be ignored. Essentially, this investigation has led us to believe that Switzerland and Cannabis are “un amour possible”.