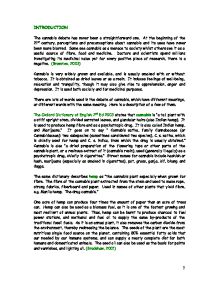 INTRODUCTION The cannabis debate has never been a straightforward one. At the beginning of the 21st century, perceptions and preconceptions about cannabis and its uses have never been more blurred. Some see cannabis as a menace to society whilst others see it as a useful source of fibre, food and medicine. Doctors and scientists spend millions investigating its medicinal value yet for every positive piece of research, there is a negative. (Brownlee, 2003) Cannabis is very widely grown and available, and is usually smoked with or without tobacco. It is obtained as dried leaves or as a resin. It induces feelings of well-being, relaxation and tranquility, though it may also give rise to apprehension, anger and depression. It is used both socially and for medicinal purposes. There are lots of words used in the debate of cannabis, which have different meanings, or different words with the same meaning. Here is a description of a few of them. The Oxford Dictionary of English 2nd Ed 2003 states that cannabis is "a tall plant with a stiff upright stem, divided serrated leaves, and glandular hairs (also Indian hemp). It is used to produce hemp fibre and as a psychotropic drug. It is also called Indian hemp, and Marijuana." It goes on to say " Cannabis sativa, family Cannabaceae (or Cannabidaceae): two subspecies (sometimes considered two species), C. s. sativa, which is chiefly used for hemp and C. s. indica, from which the drug is usually obtained." Cannabis is also "a dried preparation of the flowering tops or other parts of the cannabis plant, or a resinous extract of it (cannabis resin), used (generally illegally) as a psychotropic drug, chiefly in cigarettes." Street names for cannabis include hashish or hash, marijuana (especially as smoked in cigarettes), pot, grass, ganja, kif, bhang and dagga. The same dictionary describes hemp as "the cannabis plant especially when grown for fibre. ...read more.

It has been said that cannabis helps in the pain relief or other symptoms caused by cancer, acquired immune deficiency syndrome (AIDS), multiple sclerosis, hypoglycemia, glaucoma, arthritis, and other illnesses and chronic conditions. The Select Committee said that the principal reason for recommending that the law be changed was compassionate. Illegal medical use of cannabis was quite widespread and exposed patients and, in some cases, their carers to all the distress of criminal proceedings, with the possibility of serious penalties. (Runciman, 1999) However there is also evidence that long-term use could cause lung disease and psychotic illnesses. Short-term users have also reported a short-term memory loss, but there is no physical dependency. If cannabis is smoked, there are risks of bronchitis, lung cancer and other chest related diseases, as with tobacco. Staff from mental illness charity SANE, strongly believe there is a growing link between cannabis and psychosis. The Chief Executive, Marjorie Wallis, said; "Each study that emerges is building a large body of evidence showing just how dangerous cannabis can be for those who are vulnerable to psychotic illness. For those individuals, what may be a common way of chilling out may set them on a journey of mental disintegration and damaged lives." (Cannabis reclassified, 2004) A report by the House of Lords, summarising the harms of cannabis said: "Cannabis is neither poisonous nor highly addictive, and we do not believe that it can cause schizophrenia in a previously well user with no predisposition to develop the disease. On the medical evidence available, moderate indulgence in cannabis has little ill-effect on health, and that decisions to ban or legalise cannabis should be based on other considerations." The report went on to say that cannabis was however intoxicating enough to impair the ability to carry out safety critical tasks, could have adverse psychic effects and lead to psychological dependence. It also increases heart rate and lowers blood pressure and carries similar risks of respiratory disorders to smoking tobacco. ...read more.

At present, about 80,000 adults a year are currently arrested and fined for possession of cannabis (Doctors fear at cannabis change, 2004). Despite this expense of time and resources by the courts, and especially the police, there is little evidence of the law's effectiveness as a deterrent. There has been unease and indeed skepticism, about the present control regime in relation to cannabis because it inhibits accurate education about the relative risks of different drugs including the risks of cannabis itself. It inordinately penalises and marginalises young people for what might be little more than youthful experimentation. It bears most heavily on young people in the streets of inner cities who are also more likely to be poor and members of minority ethnic communities. Evidence indicates that the way the law currently operates may create more harm than the drug itself. (Runciman, 1999) CONCLUSION In conclusion, there are many complex issues surrounding the debate of the decriminalisation of cannabis. The main points raised include the medicinal benefits of cannabis and the adverse side effects caused by cannabis. Is there enough scientific evidence to go off to make a decision on if the benefits outweigh the risks? Will there be an impact on society, as the gateway theory suggests, leading to more 'harder' drug use or does the gateway theory only exist in the illegal drug market. Should people have the right to make their own choice on the subject or is the lack of knowledge too great for individuals to make their own choice? Are the profits from cannabis sales better off going to drug dealers or into the governments hands, where a stricter monitoring and control of sales could take place? There is no short-term solution on the subject of the legalisation of cannabis and there will have to be a lot of compromising on a lot of parts if any solution is to be reached at all. The debate of cannabis legalisation will be a long and hard one. ...read more.