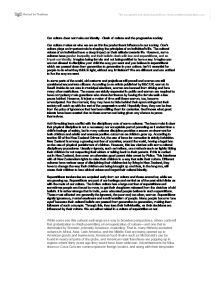 . The cultural values of an individual have a deep impact on their attitude towards life. However, some cultures have gender inequality and their beliefs clash with law and superstitions, and so impair our identity

Our culture does not make our identity - Clash of culture and the progressive society Our culture makes us who we are as it is the predominant influence in our society. One's culture plays an important role in shaping the principles of an individual's life. The cultural values of an individual have a deep impact on their attitude towards life. However, some cultures have gender inequality and their beliefs clash with law and superstitions, and so impair our identity. Imagine being female and not being entitled to have a say. Imagine you are not allowed to discipline your child the way you want and you believe in superstitions which are passed down from generation to generation in your culture. Isn't it essential for people to do what they think is right, without any limitations? We are different and are entitled to live the way we want. In some parts of the world, old customs and prejudices still prevail and women are still considered second-rate citizens. According to an article published by BBC UK, women in Saudi Arabia do not vote in municipal elections, women are banned from driving and face many other restrictions. ...read more.

New Zealand is among a growing number of countries, around the world, having a legal ban on the use of physical punishment of children. However, this law clashes with some cultural disciplinary procedures. Usually migrants, such as Indians, use methods such as lightly hitting their children for not respecting their elders or talking back to their parents. If this is carried out in New Zealand, then even an otherwise good parent risks arrest by Police. This interferes with all New Zealanders rights to raise their children in a way that suits their culture. Different cultures have various ways of disciplining their children but by living in New Zealand, they have to change the way their children are being brought up and thus, in the long run, will cause their children to lose ethical values and forget their cultural identity. Superstitious tendencies are acquired early from our culture and those around us, while we are growing up. Superstitions are part of our heritage and remind us of the past which links us with the roots of our culture. ...read more.

Advertisements for Nike shoes or Coca-Cola are commonplace in foreign locales, and along with their temptation to buy a product is the invitation to buy into an Americanized lifestyle that values consumption. Many critics of globalization see this push to expand American markets and values as a form of -one that seeks to suppress foreign cultures in order to make more of the globe open to American products and the ideas that would encourage their continued dominance. The perceived loss of indigenous traditions and values is disheartening for those who feel that globalization is a threat to cultural diversity. In conclusion, culture is pre-eminent in our society as it moulds us into characters deemed to be acceptable and it helps in rendering a sense of individualism to people. However, we do not have to accept some of the beliefs and faiths reinforcing gender inequality and superstitions which impair our identity. Such cultural beliefs should be disregarded and while this transformation holds its dangers, it is a trial every individual must face and one they must win to take their place in society. ...read more.