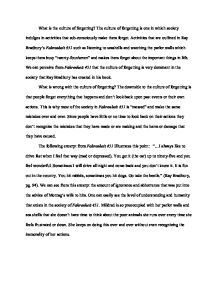 The culture of forgetting? Activities that are outlined in Ray Bradbury's Fahrenheit 451

As good as it may seem there are many downsides to the culture of forgetting. This is a culture in which people don't think about any thing that is not present and happening in the moment. Unfortunately the practice of this culture also leads people to think only about themselves. In the society that Bradbury has created in Fahrenheit 451, the only thing that is on everyone's mind is "Me," "Myself" and "I" and with this on their mind they forget about anyone else. The following two paragraphs are excerpts of the answers that Montag got after he strikes up a conversation with Mildred's friends and asks about their husbands and kids. "I plunk the children in school nine days out of ten. I put up with them when they come home three days a month; it's not bad at all .you heave them into the parlor and turn the switch. It's like washing clothes: stuff the laundry in slam the lid.........thank God, I can kick back" (Ray Bradbury, pg. 96). One can see from the above statement that Mrs. Bowles doesn't care about her kids. She wants them to be away from her as much as possible and forget about them so she has put them in a school which relieves her for 27 days a month and ...read more.

Funerals are unhappy and pagan. Eliminate them too. Five minutes after a person is dead he is on his way to the Big Flue.....Ten minutes after a person is dead he is a speck of black dust. Lets not quibble over individuals with memoriums. Forget them." (Ray Bradbury, pg. 60) Here is another quote which illustrates the fact that people don't care about their dead and forget about them: "I have meant to talk to you bout her...strange.....her (Clarisse)...I meant to tell u...forgot.... Forgot.....I think she's gone...hr family moved out...but she is gone for good....same girl...run over by a car four days ago...I am not sure...but I think she's dead" (Ray Bradbury, pg. 47 ). Mildred tells Montag about Clarisse's disappearance four days after she was run over a car. If one were to think about it and analyze the mood and tone of Mildred voice when she mentions this, they would notice that she doesn't seem to care or be in any way affected by Clarisse's death. Instead of being heartbroken and mournful of her neighbor's death she just tells Montag and then puts on her seashells (which is more important to her than most of the things in her life besides her parlor "family") One can see from the above paragraphs that the way we treat our deceased. In today's society people try to remember our deceased and try to commemorate them. ...read more.