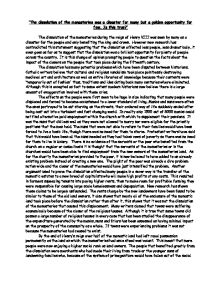 'The dissolution of the monasteries was a disaster for many but a golden opportunity for few. Is this true?'

'The dissolution of the monasteries was a disaster for many but a golden opportunity for few. Is this true?' The dissolution of the monasteries during the reign of Henry VIII was seen by many as a disaster for the people and only benefiting the king and crown. However new research has contradicted this statement suggesting that the dissolution affected less people, less dramatically, it even goes as far as to suggest that the dissolution was a brilliant opportunity for plenty of people across the country. It is this change of opinion prompting people to question the facts about the impact of the closers on the people that took place during the fifteenth century. The dissolution has many potential problems which have been disputed between historians. Catholic writers believe that cultural and religious vandalism took place pointlessly destroying medieval art and architecture as well as entire libraries of knowledge because their contents were 'temporarily out of fashion' thus, traditions and ides dating back many centuries where eliminated. Although this is accepted as fact to some extent modern historians now believe there is a large amount of exaggeration involved with these cries. ...read more.

There is no evidence of the servants or the poor who benefited from the church on a regular or casual basis it is thought that the servants at the monasteries or in the churches would have been able to find employment from the new owners of the monasteries land. As for the charity the monasteries provided to the poor, it is now believed to have added to an already existing problem instead of creating a new one. The plight of the poor was already a dire problem nation wide and the closer of the monasteries would have just intensified the problem. Another argument used to prove the dissolution affected many people in a sever way is the transfer of the monastic estates to a new bread of capitalists who will make high profits at any costs. This resulted in farmers squeezing tenants into paying higher rents, then to make room for profitable farming they were responsible for causing large scale homelessness and depopulation. New research has shown these claims to be largely unfounded. ...read more.

These people (especially the merchants) could now move up the social ladder, making the gap between rich and poor even greater. Some would argue that it was this enlargement of the land owning classes which resulted in England becoming a parliamentary monarchy freer form violent revolution. In conclusion I do not believe that the dissolution of the monasteries was a disaster for that many people, undoubtedly it did put more strain on the country economically, and it also slightly worsened the problem of poverty leading future rulers to deal with the problem but in the long run most people could find alternative employment and finance a key statistic to prove this fact was only 1500 out of 8000 monks could not find employment elsewhere. I also don't believe it was a golden opportunity for many, when you consider England's population in 1540 and compare it to the number of people who were transported to a higher social rank it is unrealistic to say that this happened to a very large percent of people. I think that 'many' and 'few' are two extremes of the situation. ?? ?? ?? ?? ...read more.