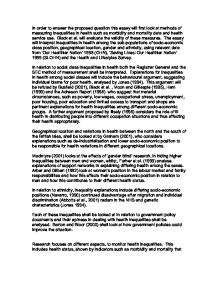 The essay will interpret inequalities in health among the sub-populations of socio-economic class position, geographical location, gender and ethnicity, using relevant data from 'Our Healthier Nation' 1998

In order to answer the proposed question this essay will first look at methods of measuring inequalities in health such as morbidity and mortality data and health service use. Black et al. will evaluate the validity of these measures. The essay will interpret inequalities in health among the sub-populations of socio-economic class position, geographical location, gender and ethnicity, using relevant data from 'Our Healthier Nation' 1998 (OHN), 'Saving Lives: Our Healthier Nation' 1999 (SLOHN) and the Health and Lifestyles Survey. In relation to social class inequalities in health both the Registrar General and the SEC method of measurement shall be interpreted. Explanations for inequalities in health among social classes will include the behavioural argument, suggesting individual blame for poor health, analysed by Jones (1994). This argument will be refuted by Busfield (2001), Black et al. , Moon and Gillespie (1995), Ham (1999) and the Acheson Report (1998) who suggest that material circumstances, such as poverty, low wages, occupational stress, unemployment, poor housing, poor education and limited access to transport and shops are pertinent explanations for health inequalities among different socio-economic groups. A further argument proposed by Illsely (1995) considers the role of ill health in distributing people into different occupation situations and thus affecting their health appropriately. Geographical location and variations in health between the north and the south of the British isles, shall be looked at by Graham (2001), who considers explanations such as de-industrialisation and lower socio-economic position to be responsible for health variations in different geographical locations. Macintyre (2001) looks at the effects of 'gender blind' research, in hiding higher inequalities between men and women, whilst, Furher et al. (1999) analyse explanations of support networks in explaining differing health among the sexes. Arber and Gilbert (1992) look at women's position in the labour market and family responsibilities and how this effects their socio-economic position in relation to men and how this contributes to their different health status. ...read more.

(OHN) Appropriate policy responses in this case would be to promote child restraint devices through legislation and distribute free safety devices and information on domestic safety. (Barton and Bloor, 2000: 30) Low income is also known to be a big factor in high smoking in class 5. OHN states that it is harder to stop smoking when you are worrying about how to make ends meet and people often smoke as a way to cope with stress. One study found that one third of children lived with a smoker and this increased to 57% with working class. One of the priorities in (OHN) is the desire to cut the number of people smoking by 2010, in order to reduce death rate from cancer by one fifth. Plans have included the development of smoking cessation clinics and restriction of tobacco advertising, in an attempt to protect young people. (Ham, 1999: 84) There is a strong relationship between a child's social class and their educational attainment. A good education gives children the confidence and capacity to make healthier choices and the ability to improve their own and their family's future. (OHN) (SLOHN) notes that people with low levels of educational attainment are more likely to have poor health as adults, and so by improving education for all will tackle one of the main causes of inequalities in health. (SLOHN) has developed many strategies to do so. These include, 'Cooking for kids', a programme that provides facts about nutrition and preparing food. This is an attempt to cut coronary heart disease and cancer, by providing children of an understanding of what fulfils a healthy diet. Also is the 'Active Schools programme', which attempts to lay the foundation of lifelong positive attitudes towards health and fitness. Poor educational achievement and teenage pregnancy are also closely linked. (OHN) Barton and Bloor (2000) state that there is evidence that the teenage pregnancy rate is higher among lower socio-economic groups, with poor educational attainment. ...read more.

Abbotts et al. (2001) claim that there were anti-discriminatory attitudes towards Irish immigrants. (Abbotts et al. 2001: 1001-1004) It is also argued that racism exists in the NHS for ethnic minorities as both consumers and employees. In the NHS the medical profession lack knowledge about diseases specific to the black community such as Sickle Cell Anaemia, which is characteristic of Afro Caribbean's, this could lead to further health problems if a wrong diagnosis is given. Despite inequalities in the health of ethnic minorities and the general population, is a lack of government, funded research in this area. (Jones 1994: 187) Some studies have produced evidence that bilingual information and interpretive services have helped to improve the health situation of ethnic minorities. (Barton and Bloor, 2000: 31) Conclusion There is considerable evidence to suggest that in many countries there are differences in health within the population both between different social groups and between different geographical regions. Such differences in health appear to arise as a result of unequal social positions, for example different social class, or membership of certain social groups such as ethnicity and gender. They are compounded by geography because people of particular social classes or from different ethnic groups concentrate in certain locations. (Moon and Gillespie, 1995: 197) The extent to which your health is affected depends on how well off you are, whether you are a man or a women, where you are born and brought up and your ethnic background. Health is now broadly defined, and the wide social influences (relating to class, geographical area, gender and ethnic relationships) on standards of health are receiving increased attention. (Jones, 1994: 172) 1GKKDSAKKKKFK94: 17) GOVERNMENT POLICIES (SLOHN) recognises that although individual behaviour is an aspect for well being, poor health can also arise from a variety of aspects such as individual behaviour, social and economic factors, such as employment situation and poverty and indeed genetic makeup. They also recognise that health inequalities exists between social classes, different areas of the country, between men and women and between people from different ethnic backgrounds. ...read more.