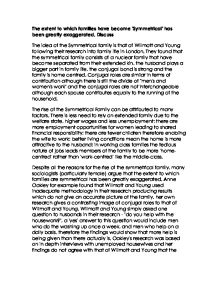 The extent to which families have become 'Symmetrical' has been greatly exaggerated. Discuss

The extent to which families have become 'Symmetrical' has been greatly exaggerated. Discuss The idea of the Symmetrical family is that of Willmott and Young following their research into family life in London. They found that the symmetrical family consists of a nuclear family that have become separated from their extended kin, the husband plays a bigger part in family life, the conjugal bond is strong and the family is home centred. Conjugal roles are similar in terms of contribution although there is still the divide of "men's and women's work" and the conjugal roles are not interchangeable although each spouse contributes equally to the running of the household. The rise of the Symmetrical Family can be attributed to many factors. There is less need to rely on extended family due to the welfare state, higher wages and less unemployment; there are more employment opportunities for women leading to shared financial responsibility; there are fewer children therefore enabling the wife to work; better living conditions mean the home is more ...read more.

Oakley's research was based on in depth interviews with unemployed housewives and her findings do not agree with that of Willmott and Young that the Symmetrical family is commonplace, this is possibly due to the fact that Oakley asked women about conjugal roles and Willmott and Young asked men, showing that the perception of who does the household chores differs greatly between the sexes. Oakley did find some evidence to support the claim of the Symmetrical Family, in her results she found men are more likely to help with childcare than they used to. However, according to the 1984 British Sociology Attitudes Survey this help seems to be restricted only to jobs the men actually enjoy such as playing with the children, Oakley found that very few men were willing to undesirable jobs such as change a dirty nappy. It would therefore appear that men can easily negotiate their way out of chores they do not like; a society with the ideology that women should be homemakers, makes it easier for them to do so. ...read more.

Family ideology has different meanings in reality. In Morris' and other surveys, partners agreed that tasks should be shared equally, but in practice they were not. If women see housework and childcare as their main role they will not want joint conjugal roles. The very assumption that husbands "help" their wives with domestic chores demonstrates that these jobs are seen as "women's work". Conjugal roles are constructed by people's views as to how they should behave. Until these views, as influenced by the media and other agents of socialisation, change, conjugal roles will remain largely segregated into male/female roles. Willmott and Young's idea of a "Symmetrical Family" is accepted by many as the ideology of today's family, however in reality the ideology of joint conjugal roles rarely materialises. The caring sharing "new man" has not emerged and conjugal roles remain primarily divided. Although equality in marriage has greatly improved in terms of joint decision making the actual day to day running of the household remains largely segregated into "men's and women's work" ...read more.