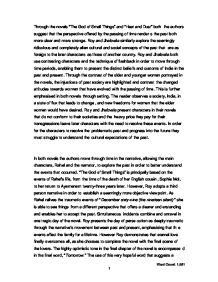 The God of Small things critique

Through the novels "The God of Small Things" and "Heat and Dust" both the authors suggest that the perspective offered by the passing of time renders the past both more clear and more strange. Roy and Jhabvala similarly explore the seemingly ridiculous and completely alien cultural and social concepts of the past that are as foreign to the later characters as those of another country. Roy and Jhabvala both use contrasting characters and the technique of flashback in order to move through time periods, enabling them to present the distinct beliefs and customs of India in the past and present. Through the contrast of the older and younger women portrayed in the novels, the injustices of past society are highlighted and contrast the changed attitudes towards women that have evolved with the passing of time. This is further emphasised in both novels through setting. The reader observes a society, India, in a state of flux that leads to change, and new freedoms for women that the elder women would have desired. Roy and Jhabvala present characters in their novels that do not conform to their societies and the heavy price they pay for their transgressions leave later characters with the need to resolve these events. In order for the characters to resolve the problematic past and progress into the future they must struggle to understand the cultural expectations of the past. ...read more.

Did he?" While being seemingly irrelevant and childish questions, they are representative of the questions Rahel is asking about the past, displaying how little she understands. The childlike viewpoint emphasises her confusion with respect to the past, evident in both novels as the main characters grapple with the customs and beliefs of the past. Both Rahel and the narrator exist in a time in India that is far more liberated, especially with respect to women. The restrictions and taboos placed upon the elder women of the novel, is explored by the narrator and Rahel, who possess the personal freedom and choice that Olivia and Ammu desired. Rahel's childhood trauma is because of her mothers transgressions, perceived at the time as unspeakable due to the social impositions of a caste system and attitudes towards women. Ammu is divorced, labelled as a "veysha" and resented by her parents and aunt, and while the adult Rahel continues to be resented as a result of her mother's transgressions, she is not, unlike her mother, ostracized after her divorce. Roy creates a strong sense of wrong and right within the novel, through the set of rules "that lay down who should be loved, and how." When Ammu and her children tamper with these laws, social boundaries are transgressed with tragic results arising out of the clash with cultural and social expectations. The cultural prejudice is emphasised through Chacko, who like his sister is divorced but as a male he suffers no disrespect for this, similarly the brutal murder of Velutha demonstrates the racism existent in India at that time. ...read more.

Both "The God of Small Things" and "Heat and Dust" are journeys of discovery, where characters seek to understand themselves by gaining an understanding of their pasts. Roy chooses to base the story around Rahel, enabling the narrative movement backwards and forwards through time from her childhood and then "twenty-three years later" in order to present two contrasting time periods. Jhabvala similarly uses two different women, Olivia in 1923, and her step-granddaughter fifty years later to contrast the two time periods in Indian history. Both the authors establish the contrasting time periods to display that the changed perspective offered by the passing of time causes the past to become clearer in some ways but at the same time also more foreign. The narrative movement in both novels enables Roy and Jhabvala to present the different beliefs and customs of India in the two time periods. The contrast between the two generations of women, as well as the parallels between them, emphasises the injustice of the past society whilst reflecting the changed attitudes towards women that have occurred with the passing of time. These changed views are further shown in both of the novels through the representation of India as a society in a state of flux, like the narrator and Rahel, grappling to reconcile the past and the present. These characters are searching to reconcile the transgressions of the elder women who would not conform to their societies, which can only be realised through attempting to understand the utterly different culture that was the past. ?? ?? ?? ?? Word Count: 1,851 1 ...read more.