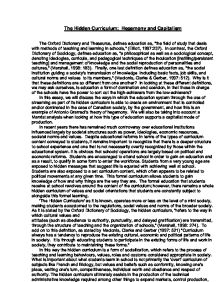 The Hidden Curriculum; Hegemony and Capitalism.

The Hidden Curriculum; Hegemony and Capitalism The Oxford Dictionary and Thesaurus, defines education as, "the field of study that deals with methods of teaching and learning in schools," (Elliott, 1997:237). In contrast, the Oxford Dictionary of Sociology, defines education as, "a philosophical as well as a sociological concept, denoting ideologies, curricula, and pedagogical techniques of the inculcation [instilling/persistent teaching] and management of knowledge and the social reproduction of personalities and cultures," (Marshall, 1998: 183). Finally, one last definition defines education as, "the social institution guiding a society's transmission of knowledge including basic facts, job skills, and cultural norms and values to its members," (Macionis, Clarke & Gerber, 1997: 512). Why is it that these definitions are so different from one another? In looking at these different definitions, we may ask ourselves, is education a form of domination and coercion, in that those in charge of the schools have the power to sort out the high-achievers from the low-achievers? In this essay, we will discuss the ways in which the education system through the use of streaming as part of its hidden curriculum is able to create an environment that is controlled and/or dominated in the case of Canadian society, by the government, and how this is an example of Antonio Gramsci's theory of hegemony. We will also be taking into account a Marxist analysis when looking at how this type of education supports a capitalist mode of production. In recent years there has remained much controversy over educational institutions influenced largely by societal structures such as power, ideologies, economic resources, societal norms and values. Despite educational reforms in terms of the types of curriculum content conveyed to students, it remains important to recognize that there is a deeper structure to school experience and one that is not necessarily overtly recognized by those within the educational system. It is obvious that schools' operations are largely based on political and economic reforms. ...read more.

Curtis, Livingstone and Smaller (1992) found that in mixed classrooms, boys received more attention from the teachers, thus, benefiting from the teacher's attention and distracting from the amount of time spent with the girls. It was also found that behavioural programs were mostly populated by boys. There are two obvious ways in which teachers' judgement of students may have an impact on the social distribution of achievement. First, as several studies have shown, teachers' expectations can colour their assessment of a student's performance, such as is the case with the self-fulfilling prophecy. In the Curtis, Livingstone and Smaller (1992) study, school teachers rated children whom they thought came from a middle-class background as better able to read than those whom they believed to be from working-class homes; standardized tests did not. The results revealed a marked difference in the reading level of these two groups of children. In cases such as this, teachers' assessments of students reflect their views of what middle-class and working-class students should be capable of, rather than their actual performance. Second, teachers may, because of low expectations, make fewer attempts to stimulate students' interest in learning, or to overcome areas of weakness. The hidden curriculum and streaming operates through a correspondence between the structure of schooling and the economic system. The nature of work and social relations fostered in the education system mirror those in capitalist society; for example, students obey orders, students have no control over the curriculum, students gain little intrinsic satisfaction from work. This mirrors or corresponds with the student's future position in the workforce. The worker has no control over work and experiences little intrinsic satisfaction. Schools act to furnish the economy with a labour force provided with the appropriate skills, personalities and attitudes. This is the 'hidden' function of schooling because it is contrary to the prevailing ideology of schooling which views the school as a device to promote social reform and social mobility. ...read more.

It is obvious the economy is largely influencing students to further their education in order to attain employment, as they are being encouraged to attend colleges and universities accordingly, such as information technology institutes and business schools. Hierarchies within schools are also likely to prepare students for hierarchies in the workplace. Just as there is a form of social control present within the work place, there is also an authoritarian hierarchy evident within educational institutions. An example of this can be taken from my own university experience, where it is clearly evident that programs geared towards computers and science are seen as more important than programs for the arts, especially with the new expansion of the Computer Science Building on the Keele campus. Computers and technology is where the future is headed and that means more money and more capital. It would appear that the hidden curriculum has much influence over the socialization of students today. How to combat the hidden curriculum as it stands, is beyond many sociologists and economists, as its creation is largely connected to the operation of wider society and until this social structure changes, educational institutions will remain the same. In some cases the de-schooling and destructuralizing of schools has been one theory largely considered and implemented in some cases to combat marketization of education, (Young & Witty, 1977). How do we go about changing the hidden curriculum to allow students to gain a more liberated and less structured form of education, when the very society from which educational institutions arise advocates authority, conformity, stratification and appropriate social values and attitudes? It remains difficult for any educational system, despite a number of reforms to deviate from the social networks evident within society. Although the hidden curriculum has been exposed, the social, political and economic values that it conveys will not Disappear. If schools are seen as a replica of society, then until the structure of society changes the hidden curriculum will be here to stay. ...read more.