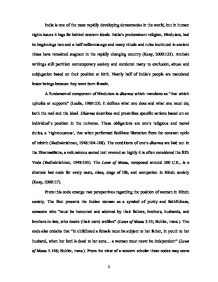 The Hindu Woman: Life under the Laws of Manu

India is one of the most rapidly developing democracies in the world, but in human rights issues it lags far behind western ideals. India's predominant religion, Hinduism, had its beginnings two and a half millennia ago and many rituals and rules instituted in ancient times have remained stagnant in the rapidly changing country (Keay, 2000:133). Archaic writings still partition contemporary society and condemn many to exclusion, abuse and subjugation based on their position at birth. Nearly half of India's people are mandated lesser beings because they were born female. A fundamental component of Hinduism is dharma which translates as "that which upholds or supports" (Leslie, 1989:23). It defines what one does and what one must do; both the real and the ideal. Dharma describes and prescribes specific actions based on an individual's position in the universe. These obligations are one's religious and moral duties, a 'righteousness', that when performed facilitate liberation from the constant cycle of rebirth (Radhakrishnan, 1948:104-108). The conditions of one's dharma are laid out in the Dharmasastra, a voluminous sacred text revered so highly it is often considered the fifth Veda (Radhakrishnan, 1948:105). The Laws of Manu, composed around 200 C.E., is a dharmic law code for every caste, class, stage of life, and occupation in Hindu society (Keay, 2000:27). From this code emerge two perspectives regarding the position of women in Hindu society. The first presents the Indian woman as a symbol of purity and faithfulness, someone who "must be honoured and adorned by their fathers, brothers, husbands, and brothers-in-law, who desire (their own) welfare" (Laws of Manu 3.55; Buhler, trans.). The code also ordains that "in childhood a female must be subject to her father, in youth to her husband, when her lord is dead to her sons... a woman must never be independent" (Laws of Manu 5.148; Buhler, trans.). From the view of a western scholar these codes may seem contradictory: how can an oppressed woman treated as a piece of property also be honoured and respected (Singh, 1996:v)? ...read more.

In general girls work more than their male counterparts. By age 10 most girls are engaged in eight hours of domestic work a day; by the time they are fifteen it is at least ten hours of work (Patil & Patil, 1996:122). Over the past few decades the numbers of young girls (those not ready for marriage) who are shouldering the burden of labour outside of the domestic realm has steadily increased. In turn, the amount of males involved in the work force is decreasing. This is because many young boys are now being enrolled in schools. Only about 15 per cent of young girls are not involved in some sort of labour (Patil & Patil, 1996:123). For most of these girls it is primarily domestic work, but many are also involved in wage labour, the rewards of which she has no entitlement. In many poor families young girls are forced into prostitution in order to support their family. It is estimated that 20 per cent of India's prostitutes are children; in Bombay alone there are 20,000 child prostitutes. A family can make a lot of money prostituting a virgin daughter (Patil & Patil, 1996:126). Even though many girls provide support for their families they are the subject of bitterness and frustration and become the victims of abuse (Guha, 1996:89). Parents rarely see a point in educating, nourishing, or nurturing their daughters because they leave the household upon marriage. Rural areas outside of a school's reach contribute to this problem, as do families who refuse to let their daughters receive an education. A census taken in 1931 noted that the rate of female literacy was 3.1% while male literacy was 17.4%. Thirty years prior female literacy had been less than one per cent (Shirras, 1931:444). A 2001 census indicated that the male literacy rate had risen to 73.4% while female literacy lagged behind at 47.8% (CIA Factbook, 2007). ...read more.

Women's rights movements have supported and freed a small proportion of Indian women, mainly those from metropolitan areas whose parents, educated under the British regime, rejected Hinduism's conservative orthodoxy and adopted western ideas such as equality (Bumiller, 1990:127). India boasts the world's largest number of professionally qualified women. It has more trained female professors, doctors and scientists than the United States (Bumiller, 1990:125), but it also has one of the lowest female literacy rates and one of the highest maternal mortality rates in the world. For the vast majority of women in the rural areas, very little has changed. Laws have been passed to outlaw child marriage (Child Marriage Restraint Age, 1929), ban dowries (Dowry Prohibition Act, 1961) and to prevent children from being exploited in the workplace (Indian Constitution of 1950, Art. 15)?, but these traditions remain pervasive, especially in rural areas. Nor have laws stopped infanticide and sex-selective abortions. Domestic abuse and violence, and the number of dowry deaths continue to escalate. Education and literacy in women is near to nil in rural areas. As the country continues its uneven development, a large proportion of its population sinks even further into poverty. In families where survival is the first priority religious tradition is often held tightest. For millennia women have been inculcated by traditional religious teachings to accept these injustices as their destiny. It impoverishes not only the religion, but the entire society, when religious leaders foster those parts of the doctrine which force women into helpless reliance and abuse. The Indian government, with its democratic ideals of liberty and equality, has long been engaging the education and the legal system to unshackle women from these archaic teachings. It is a desperately slow process. Fulfilling her dharma, as prescribed by the Laws of Manu, and hopefully reincarnating as a man, should not be the only chance a woman will have of escaping the oppressively traditional world she has been born in to. Increasingly Indian women are seeking, and finding, the independence to choose whatever role they want. ...read more.