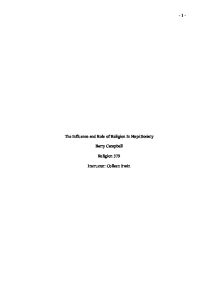 The Influence and Role of Religion In Hopi Society.

The Influence and Role of Religion In Hopi Society Barry Campbell Religion 379 Instructor: Colleen Irwin The Hopi are one of the groups of Native Americans known as the Pueblo People. The Pueblo People consist of around twenty-five tribes of Native Americans who reside in permanent, established villages in Northern Arizona and Western New Mexico (Dozier, 1970, p. 17). This area is known as the southern extension of the Colorado Plateau and is a land of high altitude and arid conditions (Whiteley, 1987, p.45). The word pueblo has its origins in the expeditions of the Spanish explorer Coronado, whose group were the first Europeans in the area. Pueblo means "town or village" in Spanish and at first referred to the buildings and architecture, but over time, the Spanish began to apply the term to the people inhabiting the pueblos1. Living in established villages and utilizing intensive agriculture, the pueblos became distinguished from other Native Americans in the area who were nomadic or semi-nomadic2. The Hopi are particularly geographically isolated to Northeast Arizona with their villages spread over three elevated, table-top like land features, known as "mesas". Today there are approximately 9 500 members of the Hopi tribe (Anthony, A.E. & Ricks, J.B., 1993, p. 6.). The Hopi are of particular interest in the study of religion. Their geographic isolation has left their society relatively unmolested (compared to their closest neighbors) by European encroachment (Dozier, 1970, p. 156). The Hopi's neighbors to the East, the Zuni, and Laguna, have been the focus of Spanish missionary aims as well as Protestant missionary aims since European contact3. Native religious practices in New Mexico were forced underground due to their being perceived as threats and competition to Christianity. However, the Hopi, due to their geographic isolation, in Arizona, were able to maintain their religious practices unabated4. The focus of this paper will be that the Hopi belief system and their belief in Kachinas are woven into and crosscut every segment of Hopi society. ...read more.

The clan groups act to support each other in various ways. Ceremonies are held in the honor of other clans and great rivalries occur between them to outdo each other. Many ceremonies are owned by clans and it is that clan's responsibility to supply the appropriate priests and to conduct the ceremony properly. These ceremonies in themselves do a tremendous deal to bind the Hopi people to their society. There is so much preparation to be done for ceremonies that it involves virtually everyone of the clan. Ritual knowledge is not freely accessible for the Hopi. Each clan has its own piece of the ritual along with its own history and tradition. A division in ceremonial and ritual knowledge does not mean social inequality, but is an outcome of diversity (Glowaka, M.D. 1998, p.2). All the different clans combined knowledge of ritual completes the calendar's cycle of ceremonies. This cohesion between the different clans is facilitated by the religion. Marriage is not permitted within related clans (Egan, 1994. p.12). Because the Hopi are matrilineal and matrilocal, loyalties and identities are distributed throughout the society. Male relatives of the matriarchs become the chiefs. Each clan chief has a particular station to occupy (Egan, 1994. p.12). One may be the village chief, one may be the war chief and one may be the Sunwatch chief (Egan, 1994. p.12). Each chief has an important role in the society and ritual and together they function as a whole. Without any one part of the whole and the ritual and the society is not in proper order. Loyalties tend to be further crosscut by the fact that the women of the society own all the homes and fields, not the clans (Egan, 1994. p.12). The belief in the ancient stories of descent dictates which clan individuals belong to as well as who may marry who. The entire way in which Hopi society is structured is based on their spiritual beliefs and cosmology and the political structure is mirrored in the spiritual world. ...read more.

This must have been important to the Hopi if it is something that children are required to learn (Adams, 1991, p 6) Right from childhood when children are given Kachina dolls, Hopi life is intertwined, with a religion that organizes the structure of society. In the Hopi world, religion is present in all aspects of society. A person's clan identity is centered on the belief in a cosmology that recognizes a particular ordering of the clans. This brings stratification to the clans with the Bear clan at the top. The Hopi religion is intimately tied to the land and has dictated where each clan resides and was a powerful tool in controlling the integration of new arrivals without conflict. Clan identification based on religion also directs who is permitted to marry. Hopi religion pervades life at an early age with the introduction of the Kachina dolls. The religious indoctrination continues at puberty with the induction into the Kachina cult. At death, the Hopi returns to the underworld to continue Hopi life there and to bring rain to the Hopi people. All aspects of society are given order by the religion. Religion connects the Hopi people to each other through the cooperative execution of ritual and ceremony. Hopi religion also aids in the initiation of the youth into adulthood. At the center of Hopi religion is the belief that Hopi life continues after death. This idea drastically affects the way in which Hopi people behave towards each other. Cooperation between the Hopi and special attention to the detail of ritual during life is a requirement if the reward of living in the underworld is to be achieved. The participation in the various ceremonies by everyone adds to the cohesive nature of the religion. All the different societies that make up the Kachina cult act as a whole and are necessary for the proper conduction of a ceremony and to make the system work. It is the Hopi religion and particularly the Kachina cult that has acted to provide cohesion in Hopi society through its ability to crosscut other social organization such as the clan. ...read more.