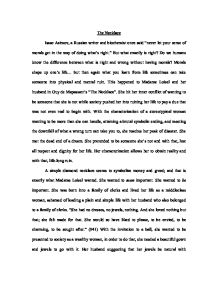 The Necklace Isaac Asimov, a Russian writer and biochemist once said "never let your sense of morals get in the way of doing what's right." But what exactly is right? Do we humans know the difference between what is right and wrong without having morals? Morals shape up one's life... but then again what you learn from life sometimes can take someone into physical and mental ruin. This happened to Madame Loisel and her husband in Guy de Mapassant's "The Necklace". She hit her inner conflict of wanting to be someone that she is not while society pushed her into ruining her life to pay a due that was not even real to begin with. With the characterization of a stereotypical woman wanting to be more than she can handle, attaining a brutal symbolic ending, and meeting the downfall of what a wrong turn can take you to, she reaches her peak of disaster. She met the dead end of a dream. ...read more.

(942) This desire seemed to engulf her - at the same time not knowing that this box would soon bring Pandora out to play - she took it out to the ball. Her thoughts obstructing her vision of reality, allowed her dreams to be caught up in a life that she would never lead: one filled with materialistic ambitions and high class respect. But none of that ever crossed her path except for a night of a total orgasmic utopia; where she found a pleasant lifestyle that she wished she had, by ruining what little comfort she had to begin with. One night at a this ball, she reached that state of pleasantness, where "she danced with intoxication, with passion, made drunk by pleasure, forgetting all, in the triumph of her beauty, in the glory of her success, in a sort of cloud of happiness composed of all this homage, of all this admiration, of all these awakened desires, and of that sense of complete victory which is so sweet to a woman's heart." ...read more.

At this, "...Mme. Forestier, strongly moved, took her two hands. 'Oh, my poor Mathilde! Why, my necklace was paste. It was worth, at most five hundred francs!'" (946) At this shock, all of the past ten years of her life were meant nothing. If she had only accepted it all as it should have been... With the characterization of a stereotypical woman wanting to be more than she can handle, attaining a brutal symbolic ending, and meeting the downfall of what a wrong turn can take you to, she reaches her peak of disaster. In all, Mme Loisel learned a valuable lesson at the morals of life: one should never wish to be more than one is. She was greedy and selfish and did not want anything but glamour and wealth - even if it meant borrowing a simple object that destroyed all the dreams she had of succeeding in society. With the ironic tone of Guy de Mapassant's "The Necklace", all the tragedy witnessed by the protagonist hits with a sudden shock to discover that her life was wasted away by "paste". ?? ?? ?? ?? ...read more.