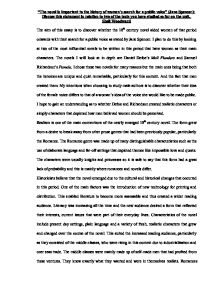 &quot;The novel is important to the history of women's search for a public voice&quot; (Jane Spencer): Discuss this statement in relation to two of the texts you have studied so far on the unit.

"The novel is important to the history of women's search for a public voice" (Jane Spencer): Discuss this statement in relation to two of the texts you have studied so far on the unit. Shell Woodward The aim of this essay is to discover whether the 18th century novel aided women of that period onwards with their search for a public voice as stated by Jane Spencer. I plan to do this by looking at two of the most influential novels to be written in this period that have women as their main characters. The novels I will look at in depth are Daniel Defoe's Moll Flanders and Samuel Richardson's Pamela. I chose these two novels for many reasons but the main ones being that both the heroines are unique and quiet remarkable, particularly for this context. And the fact that men created them. My intentions when choosing to study male authors is to discover whether their idea of the female voice differs to that of a woman's idea of the voice she would like to be made public. I hope to gain an understanding as to whether Defoe and Richardson created realistic characters or simply characters that depicted how men believed women should be perceived. Realism is one of the main conventions of the newly emerged 18th century novel. The form grew from a desire to break away from other prose genres that had been previously popular, particularly the Romance. The Romance genre was made up of many distinguishable characteristics such as the use of elaborate language and far-off settings that depicted themes like impossible love and quests. The characters were usually knights and princesses so it is safe to say that this form had a great lack of probability and this is mainly where romances and novels differ. Historicists believe that the novel emerged due to the cultural and historical changes that occurred in this period. One of the main factors was the introduction of new technology for printing and distribution. ...read more.

For someone who is supposed to be looking back at her life and reflecting on her struggles before she repented her tone through flippant discourse does not reflect this. And you must remember that Defoe's journalism skills enabled him to report realism rather than create fiction. Through Moll Defoe has created a strong feminine voice that shows no shame in claiming that it is society that has made her behave the way she did. "There is no moral discovery to be made in Moll Flanders for all the moral talk", (Arnold Kettle, page 53, An introduction to the English novel). By using the first person narrative in this picaresque novel it is left to the reader to decide whether it is Moll or Defoe's opinion but either way a feminine public voice has been heard through using the novel as a medium. From this I agree with Jane Spencer that the novel was important to the history of a woman's search for a public voice. Richardson also created a powerful feminine voice from a low class status but his character, Pamela, differed hugely from that of Moll, just as Richardson differed from Defoe. But yet like Moll, Pamela was unique and outspoken. Richardson decided to use the epistolary form for his novel and this gave the reader an insight into Pamela's innermost thoughts and feelings. For me this makes Pamela less credible than Moll. This is mainly due to the fact that she is so restrictive on her thoughts. She makes her character appear perfect but as we know humans are flawed, and showing your flaws helps one human relate to one another and this is why Moll appears to be more realistic than Pamela. Richardson followed the tradition of the conduct book and seems to have created the 'perfect' example of how a woman should behave. What makes Pamela unique though is the fact that she believes herself to be equal to the higher classes. ...read more.

Moll sees material gain as a means of survival. The more she has the more she craves, thus making her into an accomplished thief. This could also be Defoe's way of sniping at society about women's struggles as well-paid women's jobs were few and far between and many had no alternative but to steal for survival. I do not believe Defoe was condoning this activity but rather showing society that improvements needed to be made for women's rights in order to create better options for women. Through this it is plain to see just how good the novel was for voicing a woman's perspective. In conclusion I agree with Jane Spencer's statement that the novel is important to the history of a woman's public voice. By looking at two very different novels that portray women I have shown how their voices and issues have been made public. The most interesting factor I have discovered is how Daniel Defoe thought for women's rights. It could easily be said that he was one of the pioneering feminists and to be honest I did not expect to discover this in an 18th century successful male. Richardson, on the other hand, seemed to me to be trying to please all the classes. He created the perfect roll model for conduct but along the way he managed to feed hope to the underdogs by creating such a powerful identity belonging to a servant girl. By doing this both Authors have aided women in their struggle and thrown into their society many issues for debate. It was a very good start for women and through an unusual source, one of prose fiction. My findings also show that the female voices that these men created were quite realistic. Defoe's was the most realistic as Moll said things as they were whereas Pamela seemed more interested in protecting her image and Richardson seemed more interested in preaching conduct but nevertheless both authors had created believable characters within the novel genre. Shell Woodward 2,519 words excluding extracts and quotations ...read more.