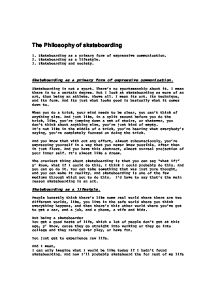 The Philosophy of skateboarding

But being a skateboarder You get a good taste of life, which a lot of people don't get at this age, y' know, cause they go straight into working or they go into college and they rarely ever play, or have fun. You just get to experience raw life. And I mean, I can only imagine what I would be like today if I hadn't found skateboarding. And now I'll probably skateboard the for rest of my life I mean, If I survive to be forty, if I can still ride a skateboard, I'm gonna skateboard. Skateboarding and society: When you're talking to people, and you see it almost everywhere, it's that the only thing they can say when they find out you're into skateboarding is the extreme games. And that's one thing I don't like about skateboarding. Its like, any time someone brings something up, whether its family or friends or whatever, they'll talk to you about the extreme games. ...read more.

Society has a lot of misconceptions about skateboarding. Skateboarding is judged on its looks rather than on its actions. In the late 70's and 80's the image of a skateboarder was a very hardcore, heavy metal, almost scary individual. The imagery of skateboarding concentrated a lot on skulls, skeletons, and bones. And people still automatically associate this image to skateboarders today. But skateboarders don't follow the same pattern of rationale that the average person in society does. If you compare a group of skateboarders to a community of people you find few similarities in the way they interact with other people, themselves, and their surroundings. For example, you will rarely ever see two skateboarders fight. This is because, in a group of skateboarders, things like race, religion, and financial background don't matter. The aggressive, diviant, and rebellious lyfestyle has nothing to do with hate. but is rather the fuel for a reveloution. And an important factor in the development of skateboarding. Volcom is at the leading end of this revolution- Youth liberation, youth against establishment, ...read more.