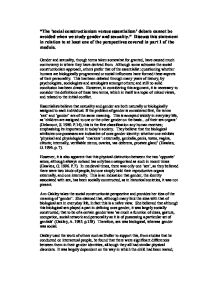 &quot;The 'social constructionism versus essentialism' debate cannot be avoided when we study gender and sexuality.&quot; Discuss this statement in relation to at least one of the perspectives covered in part 1 of the module.

"The 'social constructionism versus essentialism' debate cannot be avoided when we study gender and sexuality." Discuss this statement in relation to at least one of the perspectives covered in part 1 of the module. Gender and sexuality, though terms taken somewhat for granted, have caused much controversy in where they have derived from. Although some advocate the social constructionism approach, others prefer that of the essentialist: questioning whether humans are biologically programmed or social influences have formed these aspects of their personality. This has been debated through many years of history, by psychologists, sociologists and sexologists amongst others; and still no solid conclusion has been drawn. However, in considering this argument, it is necessary to consider the definitions of these two terms, which in itself is a topic of mixed views, and related to the initial conflict. Essentialists believe that sexuality and gender are both naturally or biologically assigned to each individual. If the problem of gender is considered first, the terms 'sex' and 'gender' are of the same meaning. This is accepted widely in everyday life, as 'children are assigned to one or the other gender on the basis...of their sex organs' (Delamont, S. ...read more.

If a female is promiscuous, she is branded with derogatory terms whereas males are not. It is also suggested that heterosexuality is the norm, and that 'non-heterosexual men and women have been traditionally viewed as problematic' (Weeks, J. et al. 2001. P.138). It has been argued that this is again due to biological differences, which is the essentialist view, dependant on the sex of the individual. Kraft-Ebbing was one such essentialist who thought 'of sex as an all-powerful instinct which demands fulfillment' (Weeks, J. 1989. P.24). However, even through history in Western society, the norms of sexuality have changed. From the fourteenth to the seventeenth centuries women were persecuted for having sexual desires, being labelled witches, and relating it to being mentally unstable. Promiscuity was described as an illness of the womb and as such the appropriately named hysterectomy was used to abolish what was termed women's hysteria. Even in Victorian times, women's sexuality was oppressed; it was only after this they began to become sexually liberated. As men are thought to be more aggressive generally, this extends to the bedroom, where men are expected to initiate sexual behaviour, although both parties are required to partake in the act of heterosexual copulation. ...read more.

1980. P.15). The relationship between sex and gender extends to sexuality immediately with the ambiguity of the word 'sex', which can connote the act of copulation or ones physiological attributes with relation to gender. This implies a direct relationship immediately, but how far can it be assumed that sexuality is dependent on gender? To this question there are two aspects, firstly the difference between men and women in the way they are perceived with relation to their sexual habits, and secondly with respect to sexual orientation. On both these parts, the large part of the evidence discussed suggests the social constructionist argument is stronger, however again important biological factors cannot be ignored, such as the necessity of reproduction which can only take place with heterosexuality present. It is for these reasons that the debate of essentialism versus social constructionism is relevant with respect to both gender and sexuality. As long as society accepts that sex is implies ones gender and sex hormones dictate ones sexuality and new evidence is produced to support the argument that society defines them, this will continue. Although based on the evidence discussed it seems that both are largely socially constructed, to take them as 'a purely social construct with no physiological basis is scientifically dangerous' (Treadwell, P. 1987. P.259). However, it seems to be the case that the 'normal' will 'take precedence over the natural' (Fausto-Sterling, A. 2000. P.8). ...read more.