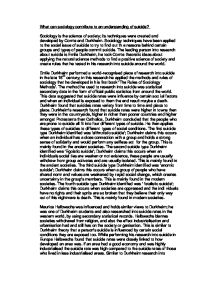 What can sociology contribute to an understanding of suicide? Sociology is the science of society; its techniques were created and developed by Comte and Durkheim. Sociology techniques have been applied to the social issue of suicide to try to find out the reasons behind certain groups and types of people commit suicide. The leading person into research about suicide is Emile Durkheim, he took Comte theoretic ideas about applying the natural science methods to find a positive science of society and create rules that he tested in his research into suicide around the world. Emile Durkheim performed a world-recognised piece of research into suicide in the late 18th century; in this research he applied the methods and rules of sociology that he developed in his first book 'The Rules of Sociology Methods'. The method he used to research into suicide was statistical secondary data in the form of official public statistics from around the world. This data suggested that suicide rates were influence by certain social factors and when an individual is exposed to them the end result maybe a death. Durkheim found that suicides rates variety from time to time and place to place. ...read more.

Taylor disagrees with the phenomenology claim that suicide is caused by social causes, but take the position of a realist and claims that to study and explain suicide rates research needs to be underlying, observable structures or causable process In 2004 Taylor criticised his own research method in his suicide research and claimed that case studies don't provide a representative sample of the whole society, and that when he was perform the examinations into these case studies he failed to investigate the movement from the immediate suicide to the immediate situation of the wider social contexts. Where Taylor believed he might have found the wider levels of causality of these suicides, and claims that his work was not sufficiently realist. In conclusion sociology methods can be used to find answers into issues that are usually difficult to research into, due to the high level of emotions involved in these cases. The leading researcher into suicide is that of the positivist Emile Durkheim, he was the first research to apply sociology methods to research into suicide. Durkheim uses of secondary public statistics has been widely criticised by fellow positivists, phenomenology and realist researchers, due their view that the 19 century statistics are unreliable and just assumptions made by the social powerful. ?? ?? ?? ?? ...read more.