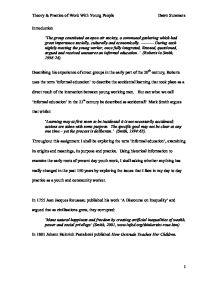 Theory and Practice of Work with Young People

Introduction 'The group constituted an open air society, a communal gathering which had great importance socially, culturally and economically. --------- During each nightly meeting the young worker, once fully integrated, listened, questioned, argued and received unawares an informal education..' (Roberts in Smith, 1998:24). Describing his experience of street groups in the early part of the 20th century, Roberts uses the term 'informal education' to describe the accidental learning that took place as a direct result of the interaction between young working men. But can what we call 'informal education' in the 21st century be described as accidental? Mark Smith argues that whilst: 'Learning may at first seem to be incidental it is not necessarily accidental; actions are taken with some purpose. The specific goal may not be clear at any one time - yet the process is deliberate.' (Smith, 1994:63). Throughout this assignment I shall be exploring the term 'informal education', examining its origins and meanings, its purpose and practice. Using historical information to examine the early roots of present day youth work, I shall asking whether anything has really changed in the past 150 years by exploring the issues that I face in my day to day practice as a youth and community worker. In 1755 Jean Jacques Rousseau published his work 'A Discourse on Inequality' and argued that as civilisations grew, they corrupted: 'Mans natural happiness and freedom by creating artificial inequalities of wealth, power and social privilege' (Smith, 2001, www.infed.org/thinkers/et-rous.htm) In 1801 Johann Heinrich Pestalozzi published How Gertrude Teaches Her Children. Like Rousseau, Pestalozzi was concerned with social justice and he sought to work with those he considered to be adversely affected by social conditions, seeing in education an opportunity for improvement. (Smith, 2001). In the first half of the 20th century John Dewey published three books that built on the earlier work of educationalists like Rousseau and Pestalozzi. These works heavily influenced the development of informal education as we know it today since they: 'Included a concern with democracy and community; with cultivating reflection and thinking; with attending to experience and the environment.' ...read more.

All of which begs the question, have we more in common with our predecessors than we like to think? It is certainly possible that they too thought they were operating with the same 'moral authority' that Jeffs & Smith describe as part of an informal educators role in: 'Being seen by others as people with integrity, wisdom and an understanding of right and wrong' (Jeffs & Smith, 1999:85) Especially in their desire to provide a 'strong guiding influence to lead them (young people) onward and upward socially and morally' (Sweatman, 1863 in Smith, 1988:12). No doubt they would also have agreed with Kerry Young's description of youth work as supporting 'young people's moral deliberations and learning' (Young in Banks, 1999:89). But early youth workers cannot be described as concerned with equality and anti-oppressive practice. On the contrary, their work was: 'Contained within particular class, gender, racial and age structures: a woman's place was in the home, to be British was to be best, betters were to be honoured and youth had to earn its advancement and wait its turn' (Smith, 1988:19) This made life extremely difficult for anyone who did not fit the stereotypical image of British youth. Tolerance and respect for other races and religious systems was not a feature of informal education and, for example, the estimated 100,000 Jewish immigrants that arrived in Britain between 1840 and 1914 had great difficulty: 'Maintaining a distinctive culture in a climate of oppression and restriction - (coupled with) pressures - to acculturate to middle-class norms' (Pryce, 2001:82) So what of my practice, of my intentionality? Do I operate from a moral underclass ideology that blames homeless young people for their situation or do I work from a redistributive discourse that sees the issue of poverty as central to the exclusion these young people experience? Can what I do in my day to day practice be termed informal education? ...read more.

In 1966 the Home Office Children's Department began planning: 'Community Development Projects - to aid work preventing family breakdown and juvenile delinquency' (Nicholls, 1997:20) which effectively takes us back 100 years. Informal education since then has taken on many guises, from concern about dwindling numbers of young people attending provision, to a growing awareness that there are young people who do not attend at all, the 'unattached' youth. However it is the continuing response to a problematic discourse that has characterised the series of moral panics about young people that has in the past and continues today to shape youth work. Conclusion Although a growing political awareness of the needs of young people who have been marginalised and excluded by society because of their race, gender, disability, sexuality and class etc., led to targeted work that was and is 'issue based', youth work has, throughout the past 150 years, maintained its associational character (Smith, 2001). However, recent work has begun to concentrate more on the individual than the 'social groupwork' (Smith, 2002, www.infed.org/youthwork/transforming.htm) Smith says is fundamental to informal education. The linking of the youth service to the Connexions Strategy with its emphasis on surveillance, control and containment, coupled with an individual, case work emphasis will mean that: 'The concern with conversation, experience and democracy normally associated with informal education is pushed to the background' (Smith, 2002, www.infed.org/youthwork/transforming.htm) Working to state led objectives and targets that are fed by a communitarianist ideology that focuses on the family mean that what informal educators do in the twenty-first century does not differ greatly from the work undertaken in the 19th and the assumption that adults have a right to intervene in the lives of young people, from a variety of hidden agendas and purposes continues unchallenged. In 1944 Paneth asked: 'Have we been intruders, disturbing an otherwise happy community, or is it only the bourgeois in us, coming face to face with his opponents, who minds and wants to change them because he feels threatened? Or do they need help from outside? (Paneth, 1944 in Smith, 1988:37). We are still awaiting the answer. ...read more.