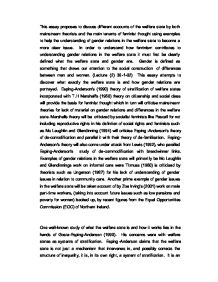 This essay proposes to discuss different accounts of the welfare state by both mainstream theorists and the main tenants of feminist thought using examples to help the understanding of gender relations in the welfare state to become a more clear issue.

Titmuss in his essay 'Community Care! Fact or Fiction?' (1968) did not refer at all to informal carers or to women. He had an image of community care as, " ..........a sense of warmth and human kindness, essentially personal and comforting." (Titmuss, 1968: 104) It was feminist contributions such as the latter, which enable us to see who and what is involved in community care and the gender issues relating to the welfare state which comply with it. Finch and Groves (1977) argue that policies for community care were, within a context of public expenditure cuts, and were fundamentally incompatible with policies for equal opportunities for women. They claimed that in practice community care equals care by the family, and in practice care by the family equals care by women. (Ungerson, 1987: 494) Because of feminist contributions and increased knowledge of community care the Equal Opportunities Commission commissioned a study of carers and for the first time a serious effort had been made to plot the incidence of caring and to discover the sex ratio. The results found, " Out of the 116 carers, 87 (75%) were women and 29 (25%) were men." (Equal Opportunities Commission, 1982b, 3) The 'Equal Opportunities Commission' then published a set of recommendations for the support of carers, in terms of services, financial benefits and employment rights. The Equal Opportunities Commission also stated, " The carers visible to government statistics are married men aged less than 64 years old caring for their disabled wives and single people caring for infirm parents. Carers are only visible to policy makers when they receive some kind of state benefit, yet many welfare benefits exclude married women...." (Equal Opportunities Commission, 1982b: 3) From this came Nissel and Bonnerjea's study (1982). The purpose of this study was to examine the extent to which caring functions of the family operate as a constraint on women's participation in the community on an equal footing with men's. ...read more.

(Pages 1-2) She claims policies should allow women to be either home-centred, adaptive or work-centred and that policies should support lifestyles and diversity. (Lecture (8) 20-2-02) Hakim and feminist's like her have all given a good contribution on gender relations in the welfare state, Hakim has taken a step further and suggests through preference theory how things should be. In Conclusion there have been a lot of different impact from different strands of feminism in an attempt to understand gender relations in the welfare state. This feminist thought has mainly come in retaliation to mainstream theories such as Esping-Anderson (1990) and Marshall (1950), who according to theorists such as Pascall and Mc Laughlin and Glendinning (1994), have not been sufficient in their arguments as they have failed to study gender differences/inequalities between men and women with relation to welfare state. Policies inefficiencies such as community care, lack of child care facilities, unpaid informal care, low pensions for low contributors which are primarily women in part-time employment and many other issues have been brought to light by feminist research. Feminists in their criticisms of mainstream theorists and the welfare state have given an invaluable contribution to understanding gender relations in the welfare state, which otherwise would not have been known. The feminist perspective has enabled us to see that gender relations in the welfare state are riddled with inequalities with women being at the heart of the disadvantage. Because of feminist movements like those mentioned so far, the inequality in gender relations has been realised and to a certain extent addressed by policies implemented, such as the Human Rights Legislation in Northern Ireland that affirms, " The right to equal opportunities in all social and economic activity, regardless of class, creed, disability, gender or ethnicity." (Good Friday Agreement, 1998: 314) Other changes made have been the new 'Statutory Equality Commission' and the incorporation of the 'European Commission of Human Rights' into Northern Ireland law. (Good Friday Agreement, 1998: 314-315) The following website also tells us that changes have been made to the 'Fair Employment Commission', regarding gender issues also. (http://www.caj.org.uk/key/docs/FairEmploymentflier.htm ...read more.