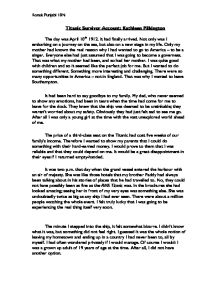 Titanic Survivor Account: Kathleen Pilkington The day was April 10th 1912. It had finally arrived. Not only was I embarking on a journey on the sea, but also on a new stage in my life. Only my mother had known the real reason why I had wanted to go to America - to be a singer. Everyone else had just assumed that I was going to become a governess. That was what my mother had been, and so had her mother. I was quite good with children and so it seemed like the perfect job for me. But I wanted to do something different. Something more interesting and challenging. There were so many opportunities in America - not in England. That was why I wanted to leave Southampton. It had been hard to say goodbye to my family. My dad, who never seemed to show any emotions, had been in tears when the time had come for me to leave for the dock. They knew that the ship was deemed to be unsinkable; they weren't worried about my safety. Obviously they had just felt sad to see me go. After all I was only a young girl at the time with the vast unexplored world ahead of me. The price of a third-class seat on the Titanic had cost five weeks of our family's income. Therefore I wanted to show my parents that I could do something with their hard-earned money. ...read more.

The band had started to play my favourite ragtime piece "Maple Leaf Rag" and I hummed to the music while I thought about my parents and Paddy and George. Suddenly the floorboards started vibrating: the engines must have been turned on. Eventually I fell asleep to the soft humming of the turning turbines. I woke up the next morning at about eight a.m. and went to the upper deck to take a breath of the fresh salty air. I hurried to the lounge as I was craving for food - I had not eaten since lunch the previous day - and the smell of sausages and bacon and half-fried eggs was particularly inviting. However I mistook the first-class lounge for third-class. Consequently, a middle-aged woman dressed in animal fur and her hair styled fashionably glared at me and complained to the ma�tre d': "What is SHE doing here?" Was this the way first-class passengers treated other passengers? The next few days were not particularly eventful. The routine was the same, although I carefully made sure that I did not run into other first-class passengers. Then April 14th came. The day I would never forget for the rest of my life. I was unable to sleep that night. I checked the bedside clock. 11.30 it read. I was tired, yet I could not turn in. Tossing and turning in my bed, I tried to drift off, but to no avail. ...read more.

Just because they had more wealth? The tumult in the air rose; in contrast, the soft pieces played by the band calmed the people down. Finally the officer pushed me into one of the lifeboats and quickly lowered it into the freezing water, and the seamen started rowing immediately. By now, there had been a noticeable tilt in the bow. She was being pulled lower and lower into the menacing seas beneath. The same arrogant woman I had encountered at the lounge incident was in the lifeboat. And in the exact same voice she had complained: "Why is SHE here?" I looked back at the once-splendid vessel now nearly perpendicular in the water. To add to our sorrow, the lights blinked and then went out for good, leaving everyone in the bitter water and the darkness, giving up hope. The hollow screams of pain and for help faded slowly away as we rowed further and further away from the wreckage. We weren't able to see anything - I just hoped we were going in the right direction. I drifted off into an anguished sleep. My eyes opened later to the warmth and comfort of another ship, which I later learnt to be the Carpathia, which had rescued us at dawn. Then the only thing that I could think of doing at the time was to cry. Hot wet tears fell from my cheeks. Tears that I was so lucky to be rescued from the sinking Titanic. And tears for the hundreds of people who had eventually plunged to their deaths... Ronak Punjabi 10N ...read more.