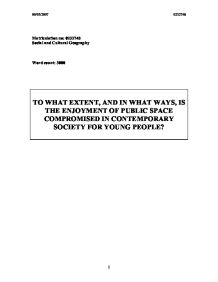 To what extent, and in what ways, is the enjoyment of public space compromised in contemporary society for young people?

Of significance is that like adults, young people are constantly moving in and out of public spaces where 'the adult gaze' is constant. However, Muslim female teenagers can express their individuality and resist conforming to social 'norms' as much as any group of young people who can and do so everyday. Why young people should to be accepted more in public space From the preceding argument it should be more clear now why giving young people a voice in contemporary society would be a valuable contribution to the adult socio-spatial world. Additionally, it is vital that young people actively use public space and negotiate everyday interactions with their peers, teachers and parents. These occur in consumption spaces, the local neighbourhood and at school, which through personal and collective interpretations of the landscape and the range of people in it can contribute to the active construction of the dynamic stages in childhood. This is achieved through both explicit and subconscious resistance to adult assumptions and categorisation of children and young people. In general, it is assumed they are not yet adults and thus, 'not deserving' of full citizen rights. However, public spaces are important to young people both materially and symbolically. They are a 'third space' away from familial control where "teenagers can actively construct their own identities on the street, and assert a sense of difference from adults" (Nayak, 2003: 311). Research on the agency of children and young people is essential to counteract prevailing adult hegemony and misrepresentation of childhood as a distinct life stage for 'human becomings', which is then used to justify restriction and control of their spatial mobility. Matthews et al. (1999) significantly contribute to the academic literature by ignoring the negative stereotyping of young people and concentrating on the European variations in young people's participation and representation in local and national politics. By drawing attention to the UNCRC (UN Convention on the Human Rights of the Child) ...read more.

Conclusion Advertising of aspirational global youth cultures (individuality and choices) and media sensationalism ('the lost generation') often recreate ambiguities for young people in their own understanding of contemporary society. On the one hand, young people are the next generation of consumers and 'our future', but an opposite image often portrays youths as a deviant and wild group to be feared and controlled. This dualism is emphasised by Kruger (1990, in Valentine, 2003) suggesting that narratives of individualisation at an increasingly young age has meant the categories of child/youth are now dissolving into adulthood (259). Young people are often searching for places to develop their social identities but as groups or 'gangs' on the street, the police, shopkeepers, office security guards and parents each to varying degrees continue to restrict their spatial mobility. Overall, there are clearly contradictions about who is a threat to society; 'dangerous' youths against the 'responsible adults' or 'untrustworthy' adults against 'confused' young people? The geographies of childhood are clearly ambiguous, contested and actively re-negotiated by adults, the state and institutional systems, and young people themselves. An understanding of how the enjoyment of public space is compromised in contemporary society needs to be assessed within both an agency and structural framework. Childhood is no longer a simple trajectory but one riddled with inconsistencies and contradictions that cannot be explained without seeing it through young people's eyes first, as was the purpose of the first half of this paper. The second half demonstrates how young people continue to be constrained by adult spatial hegemony. From the school playground to the main high street, teenager's spatial and temporal movement is constantly monitored by numerous strategies including CCTV technology, social 'norms' and 'the adult gaze', strict policing and government legislation allowing curfews. In conclusion, there is an ambiguity existing between the positive attributes of young people's individual and collective identities and negotiations in the a globalised socio-economic world; and the negative features of youths who continue to be "commonly recognised as the targets of adults' anxieties" (Kraak and Kenway, 2002: 145). ...read more.