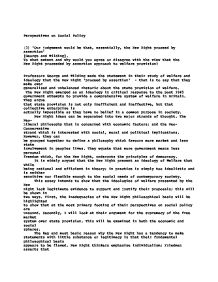 To what extent and why would you agree or disagree with the view that the New Right proceeded by assertion approach to welfare provision?

Perspectives on Social Policy (3) 'Our judgement would be that, essentially, the New Right proceed by assertion' [George and Wilding]. To what extent and why would you agree or disagree with the view that the New Right proceeded by assertion approach to welfare provision? Professors George and Wilding made the statement in their study of welfare and ideology that the New Right 'proceed by assertion' - that is to say that they make over generalised and unbalanced rhetoric about the state provision of welfare. The New Right emerged as an ideology in critical response to the post 1945 government attempts to provide a comprehensive system of welfare in Britain. They argue that state provision is not only inefficient and ineffective, but that collective enterprise is actually impossible as they have no belief in a common purpose in society. New Right ideas can be separated into two major strands of thought. The Neo- Liberal philosophy that is concerned with economic factors; and the Neo-Conservative strand which is interested with social, moral and political implications. However, they can be grouped together to define a philosophy which favours more market and less state involvement in peoples lives. They equate that more government means less personal freedom which, for the New Right, undercuts the principles of democracy. It is widely argued that the New Right present an ideology of Welfare that while being rational and efficient in theory; in practice is simply too idealistic and is neither sensitive nor flexible enough to the social needs of contemporary society. ...read more.

For the New Right, the market is the most efficient and rational way to operate economically and socially - The New Right also argue that the State presents a series of destructive economic consequences. Mead contends that the government projects a view to society that work is merely an option, not a nessecity. In other words, that social security creates a 'nanny state', causing idleness. He views the Welfare state as a victim of it's own success by feeding and sustaining the type of behaviour it is trying to minimise. Another problem with this, according to the New Right, is because the welfare state is centralised it is therefore seen as 'government money', it is depersonalised and as a result becomes vulnerable to abuse and manipulation . Again, this leads back to the view that man is individualistic and self seeking, rejecting the concept of the 'common good' or collective social conscious. In the defence of the State, it is obvious that in any socio-political arena there will be negative and positive outcomes of any kind of social policy. However they must be weighed up against each other. It is impractical and unrealistic to assess the welfare state in the abstract, as the New Right tends to. Their philosophies also ignore the complex and diverse nature of modern society, and are simply not sensitive enough to the various needs. ...read more.

Williamson summarises that the Welfare State from a New Right perspective is 'significantly inefficient as it is an effective monopoly, bureaucratic in character and dominated by producers, not consumers.' Williams also highlights the problem of the concentration of power in the market or oligopoly , which is fundamentally undemocratic. She asserts that business people rarely practice free competition whenever they are in a position to control the market themselves. This is further reinforced by Richard Titmuss in his 1959 lecture 'The Irresponsible Society' where he stressed that major monetary decisions of building societies, insurance and pension companies were being made by a small minority of people. Such decisions affect millions of people, and their views are not taken into account, which is fundamentally undemocratic. It must be noted, however, The New Right philosophy does not altogether reject the role of state in Welfare. Gray accepts the idea of quasi-markets within the welfare state, perhaps in the form of a voucher system. This way competition is still strong because people have the freedom to choose which hospital or school they want. Seldon reinforces this by suggesting that ' National economic expansion can best be helped by putting welfare by stages into the market where the consumer will rule instead of the politician'. The effectiveness of the market system is not completely convincing. The New Right tends to present a distorted and partial view of the efficiency of the free market. -more explanation of efficiency of market see george nad wildiing chapter on democratic socialism. ...read more.