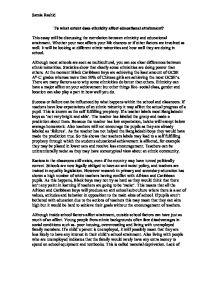 To what extent does ethnicity affect educational attainment?

To what extent does ethnicity affect educational attainment? This essay will be discussing the correlation between ethnicity and educational attainment. Whether your race affects your life chances or if other factors are involved as well. It will be looking at different ethnic minorities and how well they are doing in school. Although most schools are seen as multicultural, you can see clear differences between ethnic minorities. Statistics show that clearly some ethnicities are doing poorer than others. At the moment Black Caribbean boys are achieving the least amount of GCSE A*-C grades whereas more than 50% of Chinese girls are achieving the most GCSE's. There are many factors as to why some ethnicities do better than others. Ethnicity can have a major affect on your achievement but other things like- social class, gender and location can also play a part in how well you do. ...read more.

Teachers can be unintentionally racist as they may have stereotypical view about an ethnic community. Racism in the classroom still exists, even if the country may have turned politically correct. Schools are now legally obliged to have an anti racist policy, and teachers are trained in equality legislation. However research in primary and secondary education has shown a high number of white teachers having conflict with African and Caribbean pupils. As this happens, Black boys may not try as hard as they would think that there isn't any point in learning if teachers are going to be 'racist'. This means that all the African and Caribbean boys will produce an anti school sub culture where there is a set of values, attitudes and behavior in opposition to the main aims of school. ...read more.

Ethnic minorities have very different cultures and backgrounds. Most Bangladeshis and Pakistanis have English as a second language, which makes learning in English slightly harder. The language difference could cause difficulties in doing various school work. Communication with teachers can influence achievement of a child. Teachers possibly will mistake language difficulties for lack of ability, leading back to the self fulfilling prophecy. The pupils may be unconsciously penalized in the classroom. Language barriers can affect the attainment of a child from an ethnic background because the communication between a child and teacher can be hindered. In conclusion, the extent of ethnicity affecting educational attainment is major. Teachers labeling a pupil can easily distract them form achieving and going on to further education. The self fulfilling prophecy can lead an ethnic minority to produce and anti school sub culture which sets an attitude of not demanding any learning in the classroom. This then cataracts on to achieving less. Samia Rashid ...read more.