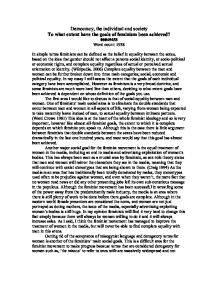 To what extent have the goals of feminism been achieved?

Democracy, the individual and society To what extent have the goals of feminism been achieved? 06049458 Word count: 1938 In simple terms feminism can be defined as the belief in equality between the sexes, based on the idea that gender should not affect a persons social identity, or socio-political or economic rights, and complete equality regardless of actual or perceived sexual orientation or identity. (Wikipedia, 2006) Complete equality between the men and women can be further broken down into three main categories; social, economic and political equality. In my essay I will assess the extent that the goals of each individual category have been accomplished. However as feminism is a very broad doctrine, and some feminists are much more hard line than others, deciding to what extent goals have been achieved is dependent on whose definition of the goals you use. The first area I would like to discuss is that of social equality between men and women. One of feminists' main social aims is to eliminate the double standards that occur between men and women in all aspects of life, varying from women being expected to take maternity leave instead of men, to sexual equality between intimate partners. (Ward Crowe 1981) This idea is at the heart of the whole feminist ideology and so is very important, however like almost all-feminist goals, the extent to which it is complete depends on which feminist you speak to. Although this is the case there is little argument between feminists that double standards between the sexes have been reduced dramatically in the last one hundred years, and most would say that this goal has almost been achieved. ...read more.

The first economic goal that I want to look at is the idea of equal pay for equal work. The main thrust of this agenda is the removal off the gap in wages that occurs between men and women doing the same jobs. The removal of this difference, known as the 'wage-gap' has been one of the major rallying points for the feminist movements as since women entered the work-place they have been paid significantly less than men for the same work. Although the wage gap still occurs today it has been reduced by up to 15% since 1970 according to some estimates (Wellington 1993) and other say it may well disappear entirely within the next ten to fifteen years. Although feminists have not at this point in time eliminated the wage gap, they have managed to reduce it massively and it looks to keep getting smaller, so most feminists would say that this goal is on it way to being completed. Coupled with this idea of equal pay for equal work is another of feminism's main economic goals; equality between the sexes in the hiring promotion and treatment of employees. There are employees who are less willing to hire women as they risk losing them after they have children, and will have to pay for maternity leave. The feminist movement had tried to address this through a series of legislation, which to a certain extent has helped although the problem definitely still occurs. ...read more.

Once again in Britain they have come some way to achieving these aims with women now allowed to work in all sectors of the military except the front line. Although feminists try to campaign for this to furthered to include women being allowed to serve in the front-line I do not think this will occur for some time, if ever, as women and men cannot serve in the same units. In other parts of the world, again the political system is less relaxed on this issue, and women are not allowed o hold any positions in the military establishment, so as a goal of feminism it has not come close to being achieved. Overall I think that socially and politically many of the goals of feminism have been achieved, at least to a large extent, whereas economically women are still disadvantaged compared to men, especially in the business sector where many things work against them. However I feel that in Britain, all three areas that feminists are fighting for equality in are improving, and there is no area where the levels of inequality are rising. On a global scale on the other hand the scene is not nearly so positive, with many nations still giving their women no political or economic power and forcing them through social customs to leave education early and follow their mothers into early marriages and house-keeping. In my opinion the feminist movement would be well advised to stop worrying so much about supposed inequality in the West and instead focus their attention on the very real problems faced by women in the third world. ...read more.

This essay begins with a Wikipedia definition of feminism; an ideal start to any essay on feminism. The structure continues to be extremely clear within reading the opening line of each paragraph, Ã¢â‚¬Å“Another major political goalÃ¢â‚¬Â¦Ã¢â‚¬Â which makes the essay ...

This essay begins with a Wikipedia definition of feminism; an ideal start to any essay on feminism. The structure continues to be extremely clear within reading the opening line of each paragraph, Ã¢â‚¬Å“Another major political goalÃ¢â‚¬Â¦Ã¢â‚¬Â which makes the essay an easy read. The conclusion is confident and perceptive, which is most likely due to the fact that it is more than just a sentence long (like most candidates write). This puts the writer in an above average marking band.

Key feminist sociological terms, Ã¢â‚¬Å“misogynistÃ¢â‚¬Â and Ã¢â‚¬Å“exploitationÃ¢â‚¬Â are used in context as well as more generic sociological terms, Ã¢â‚¬Å“ideologyÃ¢â‚¬Â which is useful. There are good uses of contemporary examples, Ã¢â‚¬Å“In Kuwait for example, the parliament just rejected a billÃ¢â‚¬Â as well as historical examples, Ã¢â‚¬Å“Although it seems amazing now up until 1918 women were not allowed to vote in Britain, and not until 1928 was the voting age loweredÃ¢â‚¬Â which shows that the candidate has a range of sociological knowledge. Statistics are used, Ã¢â‚¬Å“Although the wage gap still occurs today it has been reduced by up to 15% since 1970 according to some estimatesÃ¢â‚¬Â which provides empirical evidence. This addition to their argument is worthwhile because it is therefore made less disputable.
I feel that this essay would benefit significantly from differentiating between the different strands of feminism. For example they could mention that liberal feminists feel that their goals have largely been achieved, from the introduction of anti-discriminatory laws in the workplace, whereas radical feminists, on the other hand, believe society needs to be radically altered if we are still to achieve true egalitarianism. So they would criticise liberal feminists for arguing Ã¢â‚¬Å“goals of feminismÃ¢â‚¬Â have been achieved.

Spelling is good, and the use of quotation marks is effective in indicating key terms, Ã¢â‚¬Å“glass ceilingÃ¢â‚¬Â coined by other sociologists. References to sources have been made, throughout, to original authors in parentheses, Ã¢â‚¬Å“(Wikipedia 2006)Ã¢â‚¬Â which allows the examiner to see that the writer has recognised, and is aware of, other peopleÃ¢â‚¬â„¢s work. At the end the writer has also provided a more detailed bibliography/webliography - they should be given credit for not trying to pass othersÃ¢â‚¬â„¢ work off as their own. In addition this shows that they have taken sensitive care and consideration over the craft of their essay.