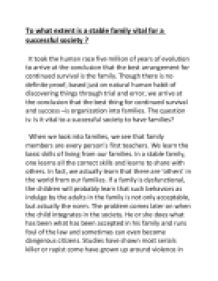 To what extent is a stable family vital for a successful society ?

﻿To what extent is a stable family vital for a successful society ? It took the human race five million of years of evolution to arrive at the conclusion that the best arrangement for continued survival is the family. Though there is no definite proof, based just on natural human habit of discovering things through trial and error, we arrive at the conclusion that the best thing for continued survival and success ?is organization into families. The question is: Is it vital to a successful society to have families? ...read more.

The problem comes later on when the child integrates in the society. He or she does what has been what has been accepted in his family and runs foul of the law and sometimes can even become dangerous citizens. Studies have shown most serials killer or rapist come have grown up around violence in their families. It is also not surprising when these research show that such criminal had no idea that what they were doing was wrong! On the other hand, children from stable families have positive role models to follow. ...read more.

More often than not, they later set up stable families as well. Though schools, the government, religious institutions and even whole societies try to make people live good live and found good, stable families, they find it difficult -if not impossible-to unteach what has been taught in the families. Naturally this works to the good as well as to the bad. This shows that no matter how much the human race has attain in the name of progress, there are certain basics that are taught by the family. Thus it is unlikely that the importance of families can be replaced by anthing else. Hence it can be concluded that families have a great importance in bringing a stable society ...read more.