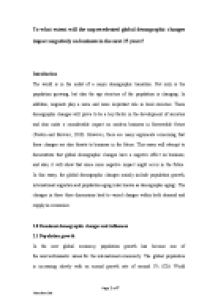 To what extent will the unprecedented global demographic changes impact negatively on business in the next 25 years?

In addition, without a strong purchasing power, business could hardly entre a rapid development. On another hand, population decline which has occurred in some developed countries might lead to a lack of labor force. This phenomenon would also affect business negatively in the future. 2.2 Population aging Population aging (also known as demographic aging) is expected to be one of the most considerable global demographic trends in the 21st century. Leonid A. Gavrilov and Patrick Heuveline defined population aging as: ?A summary term for shifts in the age distribution (i.e., age structure) of a population toward older ages. It occurs when the median age of a country or region rises due to rising life expectancy and/or declining birth rates.? We have noticed that population aging has already occurred in many industrialized regions with different degree. For the world as a whole, the elderly will grow from 6.9% of the population in 2000 to a projected 19.3% in 2050 (Table 1). ...read more.

According to the data provided by Moretti and Enrico (2004), immigration had small negative effect on the average wages of destination countries, with 0.7% in the USA and 0.8% in UK. However, employing foreign workers would increase the cost of training to local firms, such as the training about language and new enterprise Culture. From the above information, we could see that immigrants are not always beneficial to native corporations. Furthermore, some other negative impact of migrant on local business might occur in the future. For example, people have to spend more time and money on coordinating social relations because of cultural shock. 3.0 Conclusion In conclusion, this essay has investigated that the global demographic changes which include population growth, demographic aging and international migration, would influence negatively in terms of business development. Generally speaking, these changes may lead to higher labor costs which should not be ignored by enterprises. Global demographic changes are not only demographic problems but also economic issues. Accompany with economic globalization, enterprises should assess the new trends in the near future, and search for an appropriate response. ...read more.