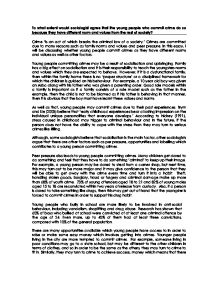 To what extent would sociologist agree that the young people who commit crime do so because they have different norm and values from the rest of society?

To what extent would sociologist agree that the young people who commit crime do so because they have different norm and values from the rest of society?

Crime ‘is an act of which breaks the criminal law of a society.’ Crimes are committed due to many reasons such as family norms and values and peer pressure. In this essay, I will be discussing whether young people commit crimes as they have different norms and values as well as other factors.

Young people committing crimes may be a result of socialisation and upbringing. Family has a big effect on socialisation and it is their responsibility to teach the youngsters norms and values which they are expected to behave.  However, if it is a dysfunctional family, then within the family home there is no ‘proper structure’ or a disciplined framework for which the children is guided on his behaviour.  For example, a 10 year old boy was given an Asbo along with his father who was given a parenting order. Good role models within a family is important as if a family consists of a role model such as the father in the example, then the child is not to be blamed as if his father is behaving in that manner, then it is obvious that the boy must have learnt these values and norms.

As well as that, young people may commit crimes due to their past experiences. Brym and Lie (2003) believe that ‘early childhood experiences bear a lasting impression on the individual unique personalities that everyone develops.’ According to hickey (1991), stress caused in childhood may trigger to criminal behaviour and in the future, if the person does not have the ability to cope with the stress than they may turn to serious crimes like killing.

Although, some sociologists believe that socialisation is the main factor, other sociologists argue that there are other factors such as per pressure, opportunities and labelling which contributes to a young person committing crimes.

Peer pressure also leads to young people committing crimes. Many children get dared to do something and feel that they have to do something ’criminal’ to keep up their image. For example, a young person may be dared to steal from a corner shop, but next time, this may turn out to be more major and it may give confidence to the person that they will be able to get away with the crime every time and turn it into a habit.  Theft, handling stolen goods, burglary, fraud or forgery and criminal damage make up more than 68% of youth crime.  73% of young offenders aged 18 to 21 and 82% of young males aged 15 to 18 are reconvicted within two years of release from custody.  Also, if a person is dared to take something like drugs, then this may get out of hand that the youngster is forced to commit crimes in order to support his drug habit.

Young people who bully in school are more likely to be involved in anti-social behaviour, including vandalism, shoplifting and drug abuse. Research has shown that 60% of boys who bullied at school were convicted of at least one criminal offence by the age of 24. Even more, up to 40% of them had at least three convictions, compared with 10% of the general population.

There are many opportunities available which young people have access to in order to raise or make some easy money which involves getting into crimes. Younger people living in the city are more tempted to commit crimes.  For example, someone living in poor conditions may go to a state school, but may be different to the other children in terms of clothes, and so in order to be the same as the others, they may turn to crime to fit in. Similarly, they may turn to crime to achieve success, money which means that there lifestyle will be of a better quality and they will be able to afford things which they could not before. By turning to crime, this is possible, as young people are given warnings and are not given a very long sentence which means that they are most likely to get away with crime.

The government labels young people as rebels and troublemakers which mean that instead of proving them wrong, young people believe in their words and so act like rebels. Labelling has a powerful influence on young people. Howard S. Becker, a theorist stated that ‘after the individual has been labelled as deviant, they progress down the path of a 'deviant career' and it becomes hard to shake off the deviant label.’

Young people commit crimes not only because they have different norms and values to society but factors such as socialisation, peer pressure and labelling play a significant part.  Young people have a number of reasons why they get involved, but socialisation plays a major role in teaching the child norms and values.  It is a lack of parental discipline which often means that the same children are caught committing crimes over and over again and later progress onto more serious crimes such as murder. If there is no role model or parental support within the family, there the child is likely to have different norms from society. Peer pressure also plays a major role as in school a child may feel pressurised due to those with a higher status and who have a reputation of being tough.