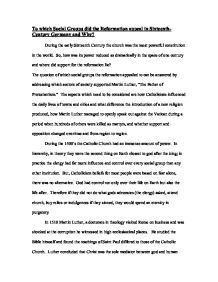 To which Social Groups did the Reformation appeal in Sixteenth-Century Germany and Why?

To which Social Groups did the Reformation appeal in Sixteenth-Century Germany and Why? During the early Sixteenth Century the church was the most powerful constitution in the world. So, how was its power reduced so dramatically in the space of one century and where did support for the reformation lie? The question of which social groups the reformation appealed to can be answered by addressing which sectors of society supported Martin Luther, "The Father of Protestantism." The aspects which need to be considered are how Catholicism influenced the daily lives of towns and cities and what difference the introduction of a new religion produced, how Martin Luther managed to openly speak out against the Vatican during a period when hundreds of others were killed as martyrs, and whether support and opposition changed overtime and from region to region. During the 1500's the Catholic Church had an immense amount of power. In hierarchy, in theory they were the second thing on Earth closest to god after the king; in practice the clergy had far more influence and control over every social group than any other institution. But, Catholicism beliefs for most people were based on fear alone, there was no alternative. God had control not only over their life on Earth but also the life after. Therefore if they did not do what gods advocates (the clergy) ...read more.

Although the enormous peasantry turned away from Lutheranism and instead became part of the Anabaptist Movement, this in turn helped the reformation succeed, as it gave Luther a chance to attract the small majority of nobles and bourgeoisie. It has now been established that Luther desperately wanted the reformation to appeal to nobility and the majority of nobles did support the reformation however, the only side they were on, was their own. King Charles definitely remained Catholic and dedicated to the papacy. This is evident throughout the whole of is reign. In 1921 he summons Luther to appear before the Diet of Worms and sides with the pope from the beginning, condemning Luther. Frederick appears as Luther's saviour fights for Luther's freedom. The pope and the king are unable to ignore the influential noble, once recommended by the papacy for the position of Holy Roman Emperor. The king however, does not let Frederick influence his opinion and on May 26 the Edict of Worms was signed by Charles condemning the leader of Protestantism. Frederick the Wise intervention at the Diet of Worms must not be misinterpreted as support for Luther or Protestantism and died a Catholic. Like most of the other nobles which the reformation appealed to, they did not support Luther or his new religion, however did not condemn it and helped Luther out of self interest. ...read more.

In conclusion the reformation appealed to all social groups for different reasons. The nobles found self interest in the reformation, the academics due to a new scientific thinking and initially the peasants, who were rejected and then felt betrayal. The reformation had the biggest impact on cities. In 1925 Nuremberg banned Catholicism. They legally had a debate where a Catholic delegate versus a Lutheran delegate and the magistrate decided who won. Wittenberg and Ebernburg followed shortly after. This was because cities were more independent and less conservative. They began opening libraries, allowing Luther's ideas to spread amongst the middle and upper class literate males. However, the very fact that the reformation was given the chance to appeal to social groups was an error made by the Pope and King Charles. Luther originally had not wanted to break away from the church; he had hoped to clear up the churches doctrine on indulgences. But the Pope and Charles had concerns elsewhere and did not intervene in the reformation fast enough. It was not until 1923 the first protestant martyr was burned and by the time action was taken against protestants, it was too late, it had already surfaced and appealed to too many social groups. In 1924 when Nuremberg was forced to renew its banishment on Luther, he was already too popular to enforce the law. The Catholic Church had controlled society, but Luther and Protestantism had given people an excuse to break free and without consequence, until it was too late. ...read more.