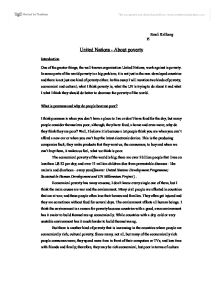 One of the greater things, the well-known organisation United Nations, work against is poverty. In some parts of the world poverty is a big problem; it is not just in the non-developed countries and there is not just one kind of poverty either. In this essay I will mention two kinds of poverty, economical and cultural; what I think poverty is; what the UN is trying to do about it and what I what I think they should do better to decrease the poverty of the world.

What is poorness and why do people become poor?

I think poorness is when you don’t have a place to live or don’t have food for the day, but many people consider themselves poor, although, they have food, a home and even more; why do they think they are poor? Well, I believe it is because a lot people think you are when you can’t afford a new car or when you can’t buy the latest electronic device. This is the producing companies fault; they make products that they want us, the consumers, to buy and when we can’t buy them, it makes us feel, what we think is poor.

The economical poverty of the world is big; there are over 3 billion people that lives on less than US $2 per day; and over 11 million children dies from preventable diseases - like malaria and diarrhoea - every year(Source: United Nations Development Programme; Sustainable Human Development and UN Millennium Project) .

But there is another kind of poverty that is increasing in the countries where people are economically rich; cultural poverty. Since many, not all, but many of the economically rich people consumes more; they spend more time in front of their computers or TVs, and less time with friends and family; therefore, they may be rich economical, but poor in terms of culture and relationships.

I believe the cultural poorness is caused by consuming;  plane and simple.

What does the UN do?

Poverty is unnatural and a man-made problem; it is unjust and a crime against human rights. So in the year 2000, the UN decided to form a list of goals that is planned to halve the world’s poverty by 2015; it is called Millennium Development Goals. The goals involve decreasing diseases, illiteracy, hunger, environmental damage and the spread of HIV/AIDS, to half by 2015.

These goals require help from all sides; governments and the people as individuals and as a group. I think that the government has to make big decisions, about homelessness and other kinds of poverty in their countries; and the people has to voluntarily help others and decrease their unnecessary consuming, so they can spend more time together.

There are different kinds of poverty, it is caused by many things and we are all needed to work together against it!