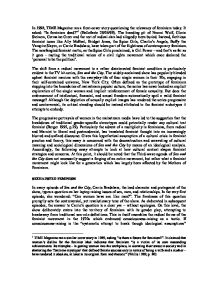 In 1998, TIME Magazine ran a front-cover story questioning the relevancy of feminism today. It asked: "Is feminism dead?"1 (Bellafante 29/06/98). The breeding pit of Naomi Wolf, Gloria Steinem, Germaine Greer and the rest of radical clan had allegedly been buried. Instead, fictitious feminist icons like Ally McBeal, Bridget Jones, the Spice Girls, Charlie's Angels, Buffy the Vampire Slayer, or Carrie Bradshaw, have taken part of the flightiness of contemporary feminism. The newfangled feminist motto, as the Spice Girls proclaimed, is Girl Power - and that's as far as it goes - muting the traditional voices of a civil rights movement which once declared the 'personal to be the political'. The shift from a radical movement to a rather disinterested feminist condition is particularly evident in the TV hit-series, Sex and the City. The widely-acclaimed show has popularly blended upbeat feminist maxims with the everyday-life of four single women in their 30s, engaging in their self-contained universe, New York City. Often defined as the prototype of feminism stepping into the boundaries of mainstream popular culture, the series has never lacked an explicit exploration of the single woman and implicit reinforcement of female sexuality. But does the embracement of intellectual, financial, and sexual freedom automatically spell a valid feminist message? Although the depiction of sexually explicit images has rendered the series progressive and controversial, its critical standing should be instead attributed to the feminist archetypes it attempts to embody. The progressive portrayals of women in the mainstream media have led to the suggestion that the breakdown of traditional gender-specific stereotypes could potentially render any cultural text feminist (Berger 1995, p.29). Particularly the advent of a multiplicity in feminisms, from radical and Marxist to liberal and postmodernist, has translated feminist thought into an increasingly blurred and unfixed discourse. Given this hypothetical assumption of a cultural crisis in feminist practice and theory, this essay is concerned with the deconstruction and unraveling of cultural meaning and sociological dimensions of Sex and the City by means of an ideological analysis. ...read more.

17). "They're obviously feminist," she responded. "You can be a feminist but that doesn't contradict the human desire for love." But such 'human desire for love' is particularly safeguarded by Hollywood and the producers of Sex and the City as well. Here, love is portrayed as a prescribed condition for marriage as if romantic love through "emotional dramas are virtually the only acceptable means of moving towards marriage" (Weisser 2001, p. 257). Indeed, disgruntled feminists of the second-wave have unconditionally asserted that the prevalence of love "justifies our exploitation by men and simultaneously ensnares us into oppressive relationships with them". To advance the flourishing of romance in a seemingly natural and neutral manner, Sex and the City is brought to a close with an absence of scenes of what succeeds the ever-after ending. Wexman reaffirms that "Hollywood films erase contradictions by making the happy ending coincide with the monogamous marriage as culmination of romantic passion and freezing this passion in an eternal moment of unproblematic unhappiness" (cited in Evans and Delayto 1998, p.7). Ideologically, Sex and the City reinforces a "desperation theme" (Dines and Humez 2003, p. 129). The implications of such are substantiated when Charlotte cries, "I have been dating since I was 15, when is my Mr. Right going to come along?" In another episode, Carrie similarly bemoans her single status during Charlotte's wedding, saying, "I would die to have a strong man catch me when I fall". And although Miranda Hobbes, a successful lawyer and single mother, asks early-on in the series, "Why do we get stuck with old maiden and spinster and men get to be bachelors and playboys?", she later draws a surprising revelation: "I must not end up old maiden or spinster". The retreat into desperation and marriage as a strategy towards addressing cultural anxieties is at the forefront in Sex and the City, yet is unsuccessful in acknowledging feminist discourse. ...read more.

Instead, the absolute value of feminism is commodified, which Goldman (1992, p. 130) readily labels "commodity feminism". He argues that "commodity feminism depoliticises and individualises feminism and defuses its potential political impact". From this perspective Sex and the City can be argued to render invisible the questions of economic status, work and social power for women. According to Bignell (2004, p. 217), the fascination with self-indulgent and pretentious activities like shopping and socialising, is a focus "relatively trivial aspects of women's lives", as opposed to raising concern over abortion, the sexual division of labour, the representation of women in politics, or the stereotypical images pursued by the media. CONCLUSION It has been more than 40 years since Betty Friedan attacked the role of women in marriage through her writings in the Feminine Mystique. Although the time-worn pages of her book might have dried out and been stacked away, feminism is indeed still alive. As evidenced by the various ideological traditions and perspectives in reading Sex and the City, one cannot conclusively determine whether the nature of the show is feminist or non-feminist. Rather, it should be acknowledged that contemporary feminism bears an abundance of ideological contradictions and complexities. This is not to say that feminism is indefinable, but part of a shift from its initial historical beliefs and assumptions. It is again arguable that postmodern feminism has severely misdirected the elements of feminism to an irrational and apolitical uncertainty. Although it may be argued that the postmodern version simply defines feminism in a flexible and relaxing way, its discourse is invariably formalised by those in power. Feminism is ideologically withheld in Sex and the City by reinforcing traditional gendered stereotypes and a consumerist culture based on the dominant ideologies of patriarchy and capitalism, respectively. Although embellished with postmodern feminist rhetoric, Sex and the City enforces a restrictive social space for women fused with the boundaries romantic love and marriage. However, despite its limitations, Sex and the City deserves acknowledgement for the (admittedly negotiated) challenge it poses to feminist assumptions, as well as the return of women's rights on the social agenda. ...read more.