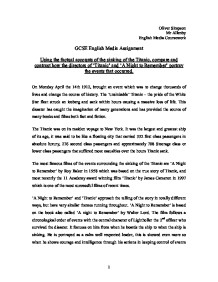 Using the factual accounts of the sinking of the Titanic, compare and contrast how the directors of 'Titanic' and 'A Night to Remember' portray the events that occurred.

Oliver Simpson Mr Allenby English Media Coursework GCSE English Media Assignment Using the factual accounts of the sinking of the Titanic, compare and contrast how the directors of 'Titanic' and 'A Night to Remember' portray the events that occurred. On Monday April the 14th 1912, brought an event which was to change thousands of lives and change the course of history. The 'unsinkable' Titanic - the pride of the White Star fleet struck an iceberg and sank within hours causing a massive loss of life. This disaster has caught the imagination of many generations and has provided the source of many books and films both fact and fiction. The Titanic was on its maiden voyage to New York. It was the largest and greatest ship of its age, it was said to be like a floating city that carried 332 first class passengers in absolute luxury, 276 second class passengers and approximately 708 Steerage class or lower class passengers that suffered most casualties over the hours Titanic sank. The most famous films of the events surrounding the sinking of the Titanic are 'A Night to Remember' by Roy Baker in 1958 which was based on the true story of Titanic, and most recently the 11 Academy award winning film 'Titanic' by James Cameron in 1997 which is one of the most successful films of recent times. 'A Night to Remember' and 'Titanic' approach the telling of the story in totally different ways, but have very similar themes running throughout. 'A Night to Remember' is based on the book also called 'A night to Remember' by Walter Lord. ...read more.

Cameron's 'Titanic' makes a totally different approach to telling the story as it is based on fictional characters which are developed over a long period of time. It is basically a dramatic love story interwoven with the story of Titanic. The story develops between Rose, a rich girl who is forced into engagement to a multimillionaire steel baron - Cal Hockley. She feels trapped inside her own world causing her to feel like death is the only way out. However she is saved by Jack, a 3rd class passenger who makes a living out of pencil drawings. They soon fall into forbidden love as Rose's fianc�e and her mother try to separate them several times. It uses flash backs from current times to the events in April 1912 through the eyes of a survivor of the disaster. The opening scenes of Titanic shows a salvage squad looking for a precious diamond that would be worth millions of pounds today. They finally find the safe which they believed it was kept in but they soon find out that the safe is empty apart from a drawing of a beautiful young girl wearing the diamond. This leads to a report on television which is seen by Rose who is now 104 years old as she recognises herself as the girl in the drawing. The salvage squad determined to find the diamond fly Rose out to the site where she recounts the events that lead to the sinking of Titanic. Throughout Titanic Cameron uses many different methods to represent the different classes by showing the contrast by focusing on the higher class to the middle class then to the lower class. ...read more.

As he is concerned that she might miss he asks her to practice on a cupboard, by hitting the cupboard, and then trying to hit the same spot for a second time, she misses by several feet, but as the situation is now frantic Jack urges her to chop through the chain. She manages it successfully, and they escape. Another example of humor is represented in the scene where the ship has sunk and jack says to Rose 'I don't know about you, but I intend to write a strongly worded letter to the White Star fleet about all this.' Cameron uses this comment to lighten the mood of the audience after witnessing such tragedy. Both films follow the same basic factual accounts of the sinking, and portray them in a similar way: the separation of children and women from their fathers; lack of life boats; priority given to 1st class passengers over 3rd class passengers to board the life boats; acts of cowardice, and the fact that the life boats did not return to help those in need. The main differences between the two representations are that 'Titanic' follows a forbidden love story, and a 'Night to Remember' focuses purely on the factual side of events. As 'A Night to Remember' is presented in a way that it frequently fools us into thinking that it's a documentary, I believe this makes the story less interesting. In my opinion as a film 'Titanic' is overall more successful in capturing the attention of the audience due to advantages of modern day special effects and the added striking love story. 1 ...read more.