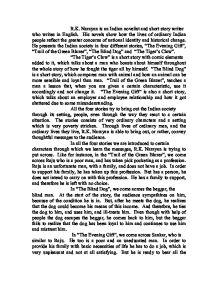 What do you find interesting about R.K. Narayan's presentation of Indian society in the stories

R.K. Narayan is an Indian novelist and short story writer who writes in English. His novels show how the lives of ordinary Indian people reflect the greater concerns of national identity and historical change. He presents the Indian society in four different stories, "The Evening Gift", "Trail of the Green Blazer", "The Blind Dog" and "The Tiger's Claw". "The Tiger's Claw" is a short story with comic elements added to it, which talks about a man who boasts about himself throughout the whole story of how he fought the tiger all by himself. "The Blind Dog" is a short story, which compares man with animal and how an animal can be more sensible and loyal than man. "Trail of the Green Blazer", teaches a man a lesson that, when you are given a certain characteristic, use it accordingly and not change it. "The Evening Gift" is also a short story, which talks about an employer and employee relationship and how it got shattered due to some misunderstanding. All the four stories try to bring out the Indian society through its setting, people, even through the way they react to a certain situation. ...read more.

In the long run they can always earn more money. But Raju is not heartless. When he stole the "Green Blazer's" purse, he thought about the motherless boy and who is not going to get the balloon purchased by the father. So he decided to put the purse, in his pocket, but he got caught and no one believed him that he was trying to put the purse back in the Green Blazer's pocket. Sankar, also, is a very loyal and trustworthy employee. He did his job with diligence and always satisfied his master. But he was unfortunate that his master turned out to be untrustworthy. For all the loyalty he gave his master, he got back nothing but heaps of insults. Here also we see, that Sankar doesn't mind what kind of a job he is doing. He knows that when he does this job, it not only supports him but his family also. If he wished, he could have always stolen from his master when he was in a drunken state. This shows that Sankar is very faithful. He was always satisfied with what he earned. ...read more.

Through the life of Sankar we a re made aware of how poor he is. In "The Blind Dog", we see a lot of poverty around. The beggar, the dog, the place in which they live, the ribbon-seller, novel-vendor and perfumer, all have a very simple and pathetic life. Through all these stories R.K. Narayan wants to show that a simple man's life can also greatly affect you and teach you great values. In an Indian value system, family is considered to be one of the first priorities, and therefore we have people like Raju and Sankar, who can get to do any type of jobs to support and take care of them. The setting makes us aware of India as a developing state, but the people in India are very well developed. Even though they are not educated, they have sustained and preserved those values, which might lead them or maybe others to become a better person. Name: Gail Edilia Rego Class: Sr 5D Coursework: What do you find interesting about R.K. Narayan's presentation of Indian society in the stories "The Tiger's Claw", "Trail of the Green Blazer", "The Evening Gift" and "The Blind Dog"? ...read more.