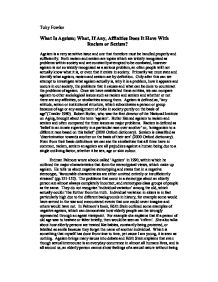 What Is Ageism; What, If Any, Affinities Does It Have With Racism or Sexism?

Toby Fowler What Is Ageism; What, If Any, Affinities Does It Have With Racism or Sexism? Ageism is a very sensitive issue and one that therefore must be handled properly and sufficiently. Both racism and sexism are topics which are widely recognised as problems within society and are constantly attempted to be combated, however ageism is not so widely recognised as a serious problem, an often people will not actually know what it is, or even that it exists in society. Primarily we must state and identify what ageism, racism and sexism are by definition. Only after this can we attempt to investigate what ageism actually is, why it is a problem, how it appears and occurs in our society, the problems that it causes and what can be done to counteract the problems of ageism. Once we have established these entities, we can compare ageism to other sociological issues such as racism and sexism and whether or not there are any affinities, or similarities among them. Ageism is defined as, "any attitude, action or institutional structure, which subordinates a person or group because of age or any assignment of roles in society purely on the basis of age"(Traxler 1980). Robert Butler, who was the first director of the National Institute on Aging, brought about the term 'ageism'. Butler likened ageism to racism and sexism and often compared the three issues as major problems. Racism is defined as 'belief in an innate superiority in a particular race over another' or, 'antagonism to a different race based on this belief' (2000 Oxford dictionary). Sexism is classified as 'discrimination towards another on the basis of their sex' (2000 Oxford dictionary). Even from their basic definitions we can see the similarities that all three have in common, racism, sexism an ageism are all prejudices against a human being due to a single outlining factor, whether it be sex, age or skin colour. ...read more.

women can be defenceless against men because society has enforced that role upon them, and elderly people cam be seen as ugly or boring because that is what our society wants them to be, just because they are not smooth skinned models, does not mean that they are in any way ugly. Palmore identifies four common responses to ageist opinions. These are 'acceptance, denial, avoidance or reform' (Palmore pp. 96-102). Therefore an elderly person may feel that he or she should appear old, even if they do not feel so inside. If an individual receives racist taunts, or simply feels that he or she is an outcast in a particular place due to their skin colour and culture, then they will naturally and understandably change the way that they act in society. It acts on the same principle when an elderly person receives rejection in society for being old, they may stop or reduce social activities. Internal negative imagery within a person, whether they are receiving racist, ageist or sexist abuse, can often cause that person being prejudice against him or herself. Persons whom are receiving prejudices against them can often shut them selves away from society, which is what Palmore calls the 'avoidance'. It makes sense that if someone feels rejected due to their skin colour, they will want to hide or move to an area where they will be accepted, similarly, an elderly person may wish to avoid society by hiding in their home or moving into an old persons home where they will only be around other elders. This is also seen through victims of sexist abuse, where studies have shown that 65% of women who undergo such abuse, hide away in their homes because they are scared to go outside, in some cases women can even develop hatred towards men. ...read more.

As it can be seen women can be victims of ageism due to sexism and vice versa, although they are separate issues, they often come hand in hand. As with sexism and racism, ageism has huge impacts on individuals self respect, esteem and motivation, limiting their potential in society. We will all eventually grow old, the most important thing is to accept that, as we must except women are no better than men, men are no better than women, and no race is superior to another. The older generation is very valuable to the structure of our society, and ageist perspectives are jut devaluing a valuable resource in our society. There are many battles going on to fight racism and sexism, but what is being done to combat ageism? To start with we can educate society more about growing old and the life of an elderly person. If we knew more about death and learnt about its spiritual aspects maybe we would not be so afraid of it, and ageism would not be so prevalent. Changes must be made in the media, institutions like businesses, government and social services. There are organisations such as the Gray Panthers, whom monitor and respond in a watchdog manner to negative images of the old in the media. We can see that there are many similarities between ageism, sexism and racism, and the problems are often interlinked. Whether or not these problems will ever be solved or eradicated from our society is the real issue. There certainly needs to be much more research into ageism, its problems, how it is brought about and the effects that it causes in society, as it is research is fairly limited. Unfortunately if we look at the research for racism and sexism, there is a massive amount but the problems still continue to persist. ...read more.