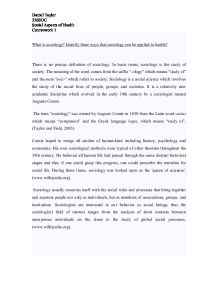 What is sociology? Identify three ways that sociology can be applied to health? There is no precise definition of sociology. In basic terms, sociology is the study of society.

What is sociology? Identify three ways that sociology can be applied to health? There is no precise definition of sociology. In basic terms, sociology is the study of society. The meaning of the word comes from the suffix "-ology" which means "study of" and the stem "soci-" which refers to society. Sociology is a social science which involves the study of the social lives of people, groups, and societies. It is a relatively new academic discipline which evolved in the early 19th century by a sociologist named Auguste Comte. The term "sociology" was coined by Auguste Comte in 1838 from the Latin word socius which means "companion" and the Greek language logia, which means "study of", (Taylor and Field, 2003). Comte hoped to merge all studies of human-kind including history, psychology and economics. His own sociological methods were typical of other theorists throughout the 19th century. He believed all human life had passed through the same distinct historical stages and that, if one could grasp this progress, one could prescribe the remedies for social ills. During these times, sociology was looked upon as the 'queen of sciences', (www.wilkipedia.org). ...read more.

Once this position is held, the person has to perform a role, known as a behavior. These concepts were utilized by Parsons to create a theoretical outlook based on individuals who are sick, hence the 'sick role'. Parsons divided the model into two categories, the rights and the obligations. The sick individual has two rights; being exempt from normal social roles. Depending on the severity of the illness, will be dependent upon the length of time they are excused from their every day responsibilities. Within society, legitimation by the physician (doctor) is required in order for the sick person to be considered justifiably ill. Society is protected by this legitimation as sick individuals may attempt to remain in the sick role longer than social expectations allow, which may result in secondary gains, for example sick pay; this is known as malingering, (Cockerham, 2001). The sick individual is not accountable for their state of health. Illness is usually thought to be beyond the individuals own control. Depending on the severity of the illness, will power and motivation is often needed in order for the sick person to become better. ...read more.

McKeown (1976) was the first person who questioned the social overvaluation of medicine. He believed that medicine had a minor effect on public health and that the changes within the environment explain the disappearance of various infections and the decrease in mortality. Not everyone agrees with McKeown, as Sontag, (1982) believed that penicillin is one of the most important discoveries to man. It has helped develop antibiotics which have led to cures of disease and infection. Medicalization is expanding because of the development of medicine and technology. New treatments to cure disease which were formerly incurable are developed continuously - also for illnesses, which formerly were trivial. New techniques are fast insisted on as routines, for all the people without any question. (Niiniluoto 2003) Reference List. Cockerham, W.C. (2001) Medical Sociology, 8th Edition. Upper Saddle River, NJ: Prentice-Hall. Gordon DR. (1988) Clinical science and clinical expertise: changing boundaries between art and science in medicine. Biomedicine examined. Kluwer Academic Publishers Lyng S. (1990) Holistic health and biomedical medicine. A counter-system analysis. State University of New York Press, New York. Sontag S. (1982) Illness as metaphor. Penguin Books, Harmondsworth. Taylor S. and Field S. (2003) Sociology of Health and Heath Care. Blackwell Publishing Ltd. ?? ?? ?? ?? Daniel Taylor 326SOC Social Aspects of Health Coursework 1 ...read more.