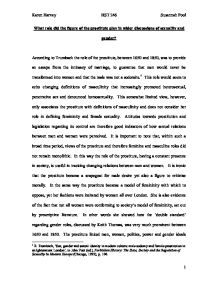 What role did the figure of the prostitute play in wider discussions of sexuality and gender?

What role did the figure of the prostitute play in wider discussions of sexuality and gender? According to Trumbach the role of the prostitute, between 1650 and 1850, was to provide an escape from the intimacy of marriage, to guarantee that men would never be transformed into women and that the male was not a sodomite.1 This role would seem to echo changing definitions of masculinity that increasingly promoted heterosexual, penetrative sex and denounced homosexuality. This somewhat limited view, however, only associates the prostitute with definitions of masculinity and does not consider her role in defining femininity and female sexuality. Attitudes towards prostitution and legislation regarding its control are therefore good indicators of how sexual relations between men and women were perceived. It is important to note that, within such a broad time period, views of the prostitute and therefore feminine and masculine roles did not remain monolithic. In this way the role of the prostitute, having a constant presence in society, is useful in tracking changing relations between men and women. It is ironic that the prostitute became a scapegoat for male desire yet also a figure to criticise morally. In the same way the prostitute became a model of femininity with which to oppose, yet her fashions were imitated by women all over London. She is also evidence of the fact that not all women were conforming to society's model of femininity, set out by prescriptive literature. In other words she showed how the 'double standard' regarding gender roles, discussed by Keith Thomas, was very much prominent between 1650 and 1850. The prostitute linked men, women, politics, power and gender ideals with a sexual underworld that allowed gender roles to be defined through public criticism and debate thus serving to promote and reinforce them. Trumbach highlighted the role of the prostitute as the necessary alternative to sodomy. Heterosexuality was, indeed, concretised during this period with the prostitute becoming proof of single male heterosexuality and confirmation that men were not engaging in sodomy. ...read more.

Acton highlighted the 'vice' of women occasioned by 'natural desire; natural sinfulness; the preferment of indolent ease to labour' this reflected reformers proposals to introduce working houses for fallen women.15 Fielding also believed that society should 'reform those prostitutes whom Necessity has drove into the streets, and who are willing to return to Virtue and obtain an honest livelihood by severe industry'.16 However, her new standing meant that she was denied agency. Being a helpless victim implied that those women who sexually offended by choice were unforgivable thus reinforcing the limits of female sexual practice through a rhetoric of pity and forgiveness towards the prostitute. Gowing contested that 'early modern England was a highly litigious society, with a sharp concern for the regulation of sex and morals'.17 The laws on prostitution were contradictory, however, often resulting in public condemnation of prostitution but little direct action to conquer it. The public nature of prostitution juxtaposed ideas that women, especially mothers and wives, had to lead a private life confined to the nucleus of the family and the home. Laws and state regulations to restrict the public presence of prostitutes served to reinforce the expectations of women to remain modest, quiet and private. Contradictions within the gender system were, however, too apparent with public prostitution therefore it needed to be curbed but the law did not target male perpetrators only the prostitutes themselves. Bullough views it as 'a period of hypocrisy symbolised by police licensing of illegal prostitution, and the uninhibited morals and manners of the very ruling groups who so piously condemned the morals of the lower classes'.18 The half-hearted attempts of men of London in the second half of the eighteenth century to remove prostitution from the streets was characterised by the low number of arrests and convictions of prostitutes. Between 1785 and 86 only fifty women were arrested. The Police Committee of 1816 believed 'that it seldom happens that individuals trouble there heads about [the presence of brothels] except where they are particularly ...read more.