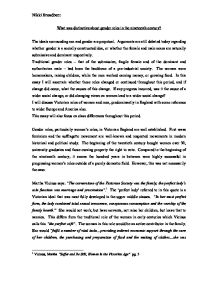 What was distinctive about gender roles in the nineteenth century?

What was distinctive about gender roles in the nineteenth century?

The ideals surrounding sex and gender are perpetual.  Arguments are still debated today regarding whether gender is a socially constructed idea, or whether the female and male sexes are naturally submissive and dominant respectively.

Traditional gender roles – that of the submissive, fragile female and of the dominant and authoritarian male – had been the backbone of a pre-industrial society.  The women were homemakers, raising children, while the men worked earning money, or growing food.  In this essay I will ascertain whether these roles changed or continued throughout this period, and if change did occur, what the causes of this change.  If any progress incurred, was it the cause of a wider social change, or did changing views on women lead to a wider social change?

I will discuss Victorian roles of women and men, predominantly in England with some reference to wider Europe and America also.

This essay will also focus on class differences throughout this period.

Gender roles, particularly women’s roles, in Victorian England are well established.  First wave feminism and the suffragette movement are well-known and respected movements in modern historical and political study.  The beginning of the twentieth century bought women over 30, university graduates and those owning property the right to vote.  Compared to the beginning of the nineteenth century, it seems the hundred years in between were highly successful in progressing women’s roles outside of a purely domestic field.  However, this was not necessarily the case.

Martha Vicinus says: “The cornerstone of the Victorian Society was the family; the perfect lady’s sole function was marriage and procreation”.[1]  The ‘perfect lady’ referred to in this quote is a Victorian ideal that was most fully developed in the upper middle classes.  “In her most perfect form, the lady combined total sexual innocence, conspicuous consumption and the worship of the family hearth.”  She would not work, but have servants, not raise her children, but leave that to nannies.  This differs from the traditional role of the woman in early centuries which Vicinus calls this “the perfect wife”.  The woman in this role would be an active contributor in the family.  She would “fulfil a number of vital tasks…providing indirect economic support through the care of her children, the purchasing and preparation of food and the making of clothes…she was expected in the lower classes to contribute to the family income”.[2]  In contradiction to the progression seen by the feminist movement in the opening on the twentieth century, this ‘perfect lady’ ideal is one where the women in stripped of any role at all.

The male role in this ideal would to be of high social integrity, a high earner – a masculine achiever.  John Tosh argues in A Man’s Place – Masculinity and the Middle-Class Home in Victorian England that “…the association with masculinity with reason, authority and resolve was consolidated; together with their dissociation from the feminine…the masculine world was for restless energy and rationality”.[3]

However, these two ideals can be related to an upper class social status, and do not apply to lower or middle class men and women.  Middle or Lower class gender distinctions came out of a need for economic survival, one in which the upper class were free from the constraints of.

The middle classes gender distinctions are therefore very different.  It can be argued that roles were forced on women, depending upon the need for viable economics within the family unit.

John Tosh says in A Man’s Place that “Victorian Middle-Class culture was constructed around a heavily polarised understanding of gender.  Both character and sexuality were seen in more sharply gendered terms than ever before or since”.[4]

The Middle-Class females were expected to be of indirect economic help by raising children and managing the cost of domestic chores.  “At a time when the concept of occupation was becoming the core element in masculine identity, any position for women other than in relation to men was anomalous”[5]  This re-iterates the “perfect wife” ideal, explained by Vicinus.  Women aided men in a social standing, economically and socially.

Middle-Class women in the nineteenth century had little that was their own.  They were their father’s property, until they married and became their husband’s property.  This began to change slowly as the number of unmarried women began to rise.  In Family Fortunes, Leonore Davidoff and Catherine Hall argued that: “Middle Class women continued to be on ‘the margins of ownership’…if anything, women’s position had deteriorated from the seventeenth century’…if anything, women’s position had deteriorated from the seventeenth century” they continue, and add “…marriage virtually turned legal control of a woman’s property permanently over to her husband”.  [6]

There is a semi-independence seen in a small percentage of middle class women, however Davidoff and Hall argue that any property ownership was “closely tied to their lifecycle status of daughter, wife and widow”.[7]

This statement indicates how woman’s life depended upon her completion of this cycle.  Being a woman in a cultural context, her gender, solely relied on becoming a wife.  “With marriage, women assumed their full adult status”

Middle Class men, on the other hand, were seen as unavailable to help in domestic chores.  Davidoff and Hall in Family Fortunes say: “On marriage men assumed economic and jural responsibility for their wives and the expected brood of children”.[8]  Their only responsibility was one of economic status, not a moral or nurturing one. “For a man, settling into marriage often coincided with taking on new responsibilities in business or profession”.[9]  Fathers were seen to be authoritarian, and controlling, in contrast with the nurturing mother, in the sphere of the home.

However, these gender distinctions relating to the nineteenth century home were only possible in a middle class ideal.

In a working class environment, gender distinctions changed.  Working class women in the late nineteenth century should have seen improvements to their lives as individuals.  Real wages increased, as did education quality in the mid-1990s, and, as Martha Vicinus points out, more importantly, “there was a rapid decline in family size”.  “The average number of children born to a family fell by nearly 35 per cent”[10]

Already established in this essay is the idea that husbands gave purpose to a woman’s life, and in turn “wives slaved to make their men content”.

Gender distinctions in the working class are therefore not completely different to those of the middle classes.  Women were seen as the keepers of the houses and in charge of the housekeeping.  However, in working class families, “whether [women] earned a salary or not, they handles most of the family’s money and were responsible not only for food shopping, but for paying the rent, buying clothes, keeping up insurance payments and overseeing school expenses for their children”.  The Victorian ethos of “cleanliness next to godliness” meant that family’s homes were judged on the housekeeping done of the women.  Working-class women were expected to keep an immaculate home, despite the obvious difficulties in this while living in near-poverty.  Crowded housing, meagre diets and a large number of children meant that “claims of sloppy housework arise almost with industrialisation itself…Wives who worked faced an almost impossible burden in keeping up with domestic chores”.[11]

The idea of women as irrational and inferior was a universal idea throughout this period.  “It was a function of natural laws which operated well beyond the boundaries of human society”[12] says Vicinus, and therefore there was to be not guilt felt over this position.  This idea is what kept women from voting and standing for any kind of social power, whether in the home or in business.  However, this view slowly changed and culminated in (some) women achieving the vote in the early twentieth century, the franchise increasing in the 1920s in include all women over-21.

There was a changing perception of women and gender distinctions in the nineteenth century.  Education, the importance of women in the indirect economics of the household, and the beginnings of a suffrage movement meant that females were gradually seen as intrinsic to the running of the family, and in some cases, family business within petty-bourgeois.

However, obviously a few changing perceptions gradually over the century were not enough to significantly alter gender perceptions.  Men and Women were still forced into marriages to complete “life cycles”, and spinsterhood and widowed men were frowned upon.  Women and Men had feminine and masculine guidelines to sustain, and in turn, teach their offspring, lest society frown upon them.  Social climbing was still a main intention of the nineteenth century, and any individual actions from men or women that went against social precedent was frowned upon.

In conclusion, I believe that gender distinctions were extremely strong in the nineteenth century, and though changes were possible, within a strict new social hierarchy emerging from the industrialisation of this period, this was relative difficult achievement.  Economic and social factors were significant elements in any change or continuity of gender distinctions.

[2] Vicinus, Martha “Suffer and Be Still, Women in the Victorian Age”  pg. ix

[3] Tosh, John “A Man’s Place.  Masculinity and the Middle-Class in Victorian England” pg. 47

[4] Tosh, John “A Man’s Place.  Masculinity and the Middle-Class in Victorian England” pg. 46