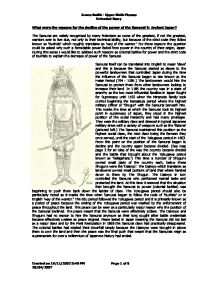 What were the reasons for the decline of the power of the Samurai in Ancient Japan?

What were the reasons for the decline of the power of the Samurai in Ancient Japan? The Samurai are widely recognised by many historians as some of the greatest, if not the greatest, warriors ever to live due, not only to their technical ability, but because of the strict code they follow known as 'Bushido' which roughly translates as 'way of the warrior.' For these reasons the question could be asked why such a formidable power faded from power in the country of their origin, Japan. During this essay I would like to address such reasons as colonial battles for power and the strict code of Bushido to explain the decrease of power of the Samurai. Samurai itself can be translated into English to mean 'slave' and this is because the Samurai started as slaves to the powerful landowners that controlled Japan during the time the influence of the Samurai began to rise known as the Heian Period (794 - 1185.) The landowners would hire the Samurai to protect them from other landowners looking to increase their land. In 1185 the country was in a state of anarchy as the two most influential families in Japan fought for Supremacy until 1192 when the Miramoto family took control beginning the Kamakura period where the highest military officer or 'Shogun' with the Samurai beneath him. This marks the time at which the Samurai took its highest point in supremacy of Japan, they stood in the highest position of the social hierarchy and had many privileges. They were the military class and dressed in typical Japanese military dress with a variety of weapons such as the 'Katana' (pictured left.) The Samurai maintained this position as the highest social class, the next class being the farmers they once served, until the start of the Tokugawa period in 1603. From this point on the position of the Samurai began to decline and the country again became divided. ...read more.

They then continued by sending a letter to the local Shogun, who instead of wanting to punish the Samurai was deeply impressed by their act of bravery and the honour they showed to their master. The shogun was left in a predicament, should he honour the Samurai or punish them by Japanese law? Or if he overlooked the act would he weaken the honour of the Ronin and betray the Samurai code? The Ronin decide to commit Seppuku simultaneously dignifying themselves and they were buried alongside their master Sengaku-Ji temple. This is just one example of the Samurai ideal. In the quest to adhere by Bushido many Samurai did not engage in battle and attempted to better themselves with self-education. They all believed in the main thoughts of Bushido, which are above all else loyalty to the master and ethical behaviour. However another motto of Bushido is that one can never be complete, there is always something new to learn or something new to try so many Samurai took the opportunity of peace during the Edu period to educate themselves in the struggle to be the Ultimate Samurai. Due to this their position as a military power began to slip because they were no longer following a military lifestyle. Colonial battles had become few and far between so Samurai were left with nothing to do except for this. Many Samurai became interested in Zen Buddhism as this too consists of creating a sound body and mind, as does Bushido. One example of a ceremony picked up from Zen Buddhism in China was the Tea ceremony. The tea ceremony normally took place in a 'tea-room', the 'chachitsu'. The guests entered through the 'nijiriguchi', with samurai leaving their swords outside and the last to enter closing the door behind him. The tearoom was arranged so that those entering would first spy a scroll hanging in the 'tokonoma' - or alcove. ...read more.