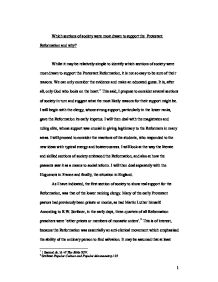 Which sections of society were most drawn to support the Protestant Reformation and why?

Which sections of society were most drawn to support the Protestant Reformation and why? Whilst it may be relatively simple to identify which sections of society were most drawn to support the Protestant Reformation, it is not so easy to be sure of their reasons. We can only consider the evidence and make an educated guess. It is, after all, only God who looks on the heart.1 This said, I propose to consider several sections of society in turn and suggest what the most likely reasons for their support might be. I will begin with the clergy, whose strong support, particularly in the lower ranks, gave the Reformation its early impetus. I will then deal with the magistrates and ruling elite, whose support was crucial in giving legitimacy to the Reformers in many areas. I will proceed to consider the reactions of the students, who responded to the new ideas with typical energy and boisterousness. I will look at the way the literate and skilled sections of society embraced the Reformation, and also at how the peasants saw it as a means to social reform. I will then deal separately with the Huguenots in France and finally, the situation in England. ...read more.

These groups have been described as ideologically and socially mobile, which may give some indication as to why they were attracted to the Reformation. The idea that they did not need the priest to explain the way of salvation, but that they were able to come to this understanding by themselves, would appeal to those who felt they had a place in society and had acquired skills not generally possessed by their less well educated neighbours. They may also have had ambitions to preach, which could not well have been fulfilled within the old order. The Reformation received a great deal of support from the common people, at least in the early days. As has been mentioned, the reformers emphasised the right of the unordained to approach God. In 1520, Luther spoke of the 'Priesthood of all believers' and denied the efficacy of the ritual of ordination. The peasants who rushed to support these new ideas were in the main influenced by a desire for social reform. They resented the exorbitant charges imposed on them for 'spiritual' services, by a priesthood whose manner of life, in many cases, was in direct contradiction to the piety they expressed. ...read more.

In every area where the Reformation flourished, the literate sections of society were at the forefront. It has been said that to be a Protestant it was essential to be literate.17 Whilst this may not be absolutely true, one might paraphrase an old clich� and say 'You don't have to be literate to be a Protestant, but it helps'. The support received from the peasants has been seen to be pragmatic rather than spiritual, as was probably the case with the ruling elite. As far as the Reformers themselves were concerned, whilst they would have welcomed any support that gave liberty to the preaching of the Gospel, they would have been more interested in reform of the individual through Conversion, than in mere numbers 'signing up', as one of their chief complaints against the old system, was that totally unspiritual people were given a form of spiritual security by financial payment or by the performance of some ritual. As can be seen by Luther's reaction to the peasant uprising, the Reformers were sometimes aghast at the way their teaching was interpreted. What can be stated, with some confidence, is that the support the Reformation received, for whatever reasons its supporters may have had, ensured that it was a movement that would have lasting significance, and would be seen by generations of Protestants as the most significant event in history since the New Testament age. ...read more.