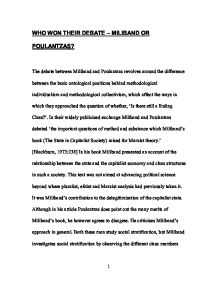 Who won their debate - Miliband or Poulantzas?

WHO WON THEIR DEBATE - MILIBAND OR POULANTZAS? The debate between Miliband and Poulantzas revolves around the difference between the basic ontological positions behind methodological individualism and methodological collectivism, which affect the ways in which they approached the question of whether, 'Is there still a Ruling Class?'. In their widely publicised exchange Miliband and Poulantzas debated 'the important questions of method and substance which Miliband's book (The State in Capitalist Society) raised for Marxist theory.' [Blackburn, 1973:238] In his book Miliband presented an account of the relationship between the state and the capitalist economy and class structures in such a society. This text was not aimed at advancing political science beyond where pluralist, elitist and Marxist analysis had previously taken it. It was Miliband's contribution to the delegitimisation of the capitalist state. Although in his article Poulantzas does point out the many merits of Miliband's book, he however agrees to disagree. He criticises Miliband's approach in general. Both these men study social stratification, but Miliband investigates social stratification by observing the different class members and their actions. Poulantzas on the other hand, studies social stratification through observing the surface manifestations of institutional relationships. ...read more.

These elites consisted a single homogenous ruling class. At the same time, methodological individualism was also reducionist because it assumes that every institution can be reduced to individuals even when they are apparently non-people such as - state, army etc, but they too can be reduced to a string of individuals. Similarly the state, bureaucracy will be seen to be having interpersonal relationships between its members from the ties between them mentioned earlier. As Miliband says in 'The State in a Capitalist Society', the bureaucratic elites in terms of social origin are all drawn from the worlds of business, property or professional middle classes. [Miliband, 1969: 66] The methodological individualism approach is also dispositional. By dispositional, it is meant that 'there is no social trend, which exists, which could not be reversed by those there present provided they had the information and the will - so examine what they think and want.' [Archer, 2004] Miliband in this case reverses the argument that the ruling class does not exist any longer since the managerial revolution. He says that the manager's aims to make profits and hence they fall into the same category as the owners, thus becoming a part of the ruling class themselves. ...read more.

However, methodological individualists often break away from these requirements, as the facts that are used in explanations are not completely individual or dispositional. The predicates often does include, 'statements about the dispositions, beliefs, resources and other inter-relations of individuals' as well as their 'situations...physical resources and environment'. [Watkins, 1971: 270-1] Thus, in social analysis we have to be less concerned with interpersonal relationships, and more with the social contextual relations. Yet, as Watkins argue, 'no social tendency exists which could not be altered if the individuals concerned both wanted to alter it and possessed the appropriate information.' [Watkins, ibid.] Whatever thus be the environmental contexts, they are affected by individuals and individuals are affected by them. Hence, even though methodological individualism and methodological collectivism, in their own rights are extremely important, in my opinion, the best way to study social reality would be to interconnect these two approaches. The debate between Miliband and Poulantzas is one of the most important pieces of research work that have come up in the last decades. However, trying to come to a conclusion to the question of who won their debate is very difficult. Thus, I shall conclude this essay by stating that both these intellectuals are right, but perhaps reconciliation between these two approaches would be the best. ...read more.