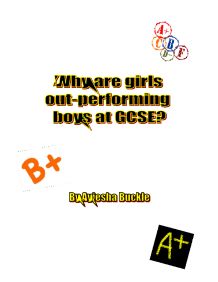 Why are girls out-performing boys at GCSE

Introduction - Why are girls out-performing boys at GCSE? For my coursework, I am researching into why girls are generally doing better than boys when it comes to GCSEs, because I want to see if the subjects being taught are more intended for girls rather than boys meaning that the boys pay less attention. I feel rather strongly about this because being a girl I think that the current subjects taught in my school are more directed at girls and that they seem to listen more if the subject is interesting and directed towards something they like. One aim: Why are girls out-performing boys at GCSE? A Second aim: Is the reason to do with coursework? A Third aim: Are teachers stereotyping girls to be better than boys to begin with? This year's GCSE exam results, for more than 600,000 students, show that girls are still outstripping boys in almost every subject. Last year, boys narrowed the gap by 0.3 to 8.9 percentage points but this year it increased to nine percentage points. The government says it is worried by the "unacceptable" difference. On the BBC - Simon, London, UK said: Girls now outperform boys at GCSE because of the 'feminisation' of the examination process. Whereas before a typical history question might have read "give an account of the key events during the reign of Queen Victoria, and explain why they are significant", the question now reads "Describe what it might have been like growing up in a Manchester poor house during the reign of Queen Victoria." ...read more.

Since my questionnaire does not have loads of questions I'd be able to stand and wait for them to be filled out, without taking up to much time. The advantage of this method is it won't cost the school paper money for the print outs but I won't pay anything either because I have loads of printer paper and ink. In real life it also wouldn't be expensive as printing forms out and isn't as expensive as buying recording tapes for interviews. Also as I am collecting the forms back at my school this will mean I won't have to spend money on stamps or envelops. Another advantage is I can give out the forms at my school and I know lots of people so they won't lie as much as if I just gave them to people randomly in the street. My questionnaire gave my respondents anonymity. I did this by making sure there were no questions that needed a personal answer, e.g. there were no questions on gender, age or name. Another ethical problem is if I was an adult researcher and I was conducting research in a school I would need to have a Criminal Records Bureau (CRB) check. Also another ethical consideration was permission, so I sort out permission from teachers and student's parents. The problems with doing a closed questionnaire are that people can't expand on their answers e.g. a person can't say there is another reason that could affect exam performances. ...read more.

It is that they now face examinations which have been feminised, and which fail to bring out their strong point'. This act might have caused teachers to stereotype/label girls as being better to work with, therefore achieving more and doing better. From doing this coursework on 'Why are girls out-performing boys' I have learnt that coursework has a big affect on GCSE results, but also that I didn't fully accomplish my aims and therefore have not been able to learn why girls are out-performing boys at GCSE. But I did find out that teachers may be labelling/stereotyping girls as better but cannot be sure. Glossary Stereotype: The assumption or belief that all members of a particular group are the same. Feminisation: The practice, especially in female dominance, of switching the gender role of a male submissive. Representative: A sample that has approximately the same distribution of characteristics as the population from which it was drawn. Pilot Study: A smaller version of a study that is carried out before the actual investigation is done. Stratify: Divides society into social classes. Working Class: Lowest class in most social class systems, including factory workers, miners and others. Middle Class: A social class of business or professional people. Upper Middle Class: A sub-label sometimes applied by sociologists to the social group of wealthier or more privileged members of the middle class. Index C Conclusion 10-11 F Findings and Analysis 7-9 G Glossary 12 I Introduction 1-2 M Methodology 3-4 P Pilot Questionnaire 5 Q Questionnaire 6 ?? ?? ?? ?? Ayiesha Buckle 13 ...read more.