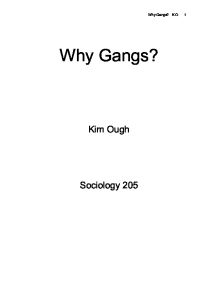 Why Gangs? Kim Ough Sociology 205 The Problem... Gang Activity The problem of gang activity is not a new one facing our country. Ever since the beginnings of human existence gangs have served as a means of protection for humans. The issue of gang activity has recently, however, come to the forefront of dilemmas facing our nation. While cities like Chicago and Los Angeles are chronic gang sites, other cities such as Miami, Portland, Columbus, Dallas, and Milwaukee have only recently, within the last decade, had what they would term as a gang problem" (Conly 7). Gang numbers have, without question, skyrocketed over the past 10 to 20 years. Los Angeles, for example, has recently been estimated to have as many as 90,000 gang members (Conly 14). The importance of these numbers cannot be overlooked. However, to fully understand the problems that gangs may pose to society, the term gang must be defined. Without a definition the impact of gang maliciousness on society may be lost. What is a gang? Throughout its history the term "gang" has possessed a diverse usage, being linked to outlaws in the "wild west" and organized crime groups in addition to an innocent gathering of friends (Decker and Van Winkle 2). ...read more.

(Conley, 98) What do actual members say about Gangs? According to Sgt. Howell of the Racine Co. Police Dept., most gang members cite a lack of jobs and other resources as a major reason for joining gangs. A large portion also say that camaraderie and a sense of belonging were reasons for joining a gang. Many of those polled indicated that if given a viable option, gang life would not be their primary choice. The ex-gang member that I spoke with indicated it was the camaraderie and sense of belonging that pulled him in. Being somewhat of an outcast at school and having an unbalanced family background, the close ties and acceptace offered by the gang drew him in. (German) Alternative thoughts There are, of course, other reasons to join a gang. Many theorists believe that the close proximity of kids in the inner city lead to the embryonic stages of gang activity, also the new anti social structure of cities effects the ease in which a boy/girl can join a gang. " The formation of gangs in cities, and most recently in suburbs, is facilitated by the same lack of community among parents. The parents do not know what their children are doing for two reasons: First, much of the parents' lives is outside the local community, while the children's lives are lived almost totally within it. ...read more.

Then each neighborhood must capitalize upon its strengths in order to overcome its weaknesses. To do that, everybody must get involved. Keep watch over a neighbor's home. Volunteer to work with youth. Donate your time and talent to neighborhood projects. Do something to contribute to your neighborhood's capacity for providing youth with opportunities to become productive, law-abiding members of civil society. Everyone must enlist themselves and each other in the unceasing and unyielding effort to steward youth into a promising future. Conclusion: Kids joining gangs is a difficult problem and not one readily solved with an easy solution. There are many reasons kids join gangs, primarily all of them are due to a lack of basic emotional, financial, and physical support at home and from within the community. While I personally agree with the outline of programs as established by the NEA, which encourage programs geared at prevention, intervention, and suppression, I cannot honestly say that I am confident of their success in great enough numbers to make a significant impact. However, while it is easy for me to be a critic, I personally cannot recommend a solution that is superior to that of the NEA other than resolving family issues and increasing community involvement and support both of which are not easily achieved. ...read more.