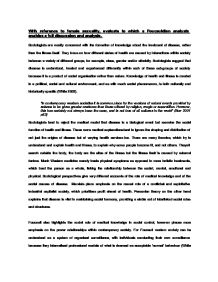 With reference to female sexuality, evaluate to which a Foucauldian analysis enables a full discussion and analysis.

With reference to female sexuality, evaluate to which a Foucauldian analysis enables a full discussion and analysis. Sociologists are mostly concerned with the formation of knowledge about the treatment of disease, rather than the illness itself. They focus on how different states of health are caused by interactions within society between a variety of different groups, for example, class, gender and/or ethnicity. Sociologists suggest that disease is understood, treated and experienced differently within each of these sub-groups of society because it is a product of social organisation rather than nature. Knowledge of health and illness is created in a political, social and cultural environment, and as with much social phenomenon, is both culturally and historically specific (White 2002). "in contemporary western societies it is common place for the versions of natural events provided by science to be given greater credence than those offered by religion, magic or superstition. However, this has certainly not always been the case, and is not true of all cultures in the world" (Burr 2001 p63) Sociologists tend to reject the medical model that disease is a biological event but examine the social function of health and illness. These more medical explanations tend to ignore the shaping and distribution of not just the origins of disease but of varying health services too. There are many theories, which try to understand and explain health and illness, to explain why some people become ill, and not others. ...read more.

A workforce is encouraged to look after oneself physically in order to guarantee bodily health, thus a healthy workforce. Foucault suggests that a dominant discourse maintains its power through a combination of external enforcing and interal self-policing and self-surveillance. Experts are in place such as doctors and police to enforce normality and punish deviance. However , as humans we constantly assess our behaviour in the social context we are in and amend it accordingly, often without any external influence. Foucault himself used the analogy of the panoptian prison, describing self-surveillance as: "an inspecting gaze which each individual under its weight will end by exteriorising to the point that he is his own overseer, each individual thus exercising this surveillance over and against himself" (Jones 2003) Of course, there is opposition to all dominant discourses at any time, particularly in modern societies where alternative viewpoints can be well publicised and promoted until grown in strength. However, the power of medicine lies in the exclusive nature of medical discourse rather than its scientific basis. The complex terminology and language used by medical profession excludes the majority of people. Bio-power, as defined by Foucault in terms of two interrelated forms of social control. Firstly the disciplinary model of power is used to describe the way bodies are regulated, trained and understood. Disciplinary power creates norms, which become accepted, and self-policed, instilled through institutions such as schools and prisons, operating at an individual level, as well as through society as a whole. ...read more.

In terms of opposition to the dominant discourse of the female body, Foucauldian's focus upon the radical changes that took place from early 20th century. The introduction of a sex manual in 1916, which focussed upon women's pleasure rather then men's, the production of contraception in 1920 leading women to have more control over their bodies than ever before. The 1960's saw an even more constructive battle over the female body emerge, with marches and protests all focussed upon the liberation of the female body. Foucault is useful in that he historically locates medical knowledge, especially allowing for the development of the sociology of the body. He has been appropriated and extended by several key theorists, especially several feminists in construction of gender specific bodies that need analysing (White 2002). Foucault points out that biological facts cannot be interpreted away and that there is in fact no 'universal man,' and that an individual has to invent him/herself, there is nothing to miraculously discover. He made an important contribution to our understanding of the construction of modern society, in highlighting the relevance in understanding that contemporary society has become increasingly disciplined, regulated and kept under surveillance. Although he places great emphasis on human wilfulness, he does tend to ignore the physical aspects of the body concentrating solely on the social with no allowances for the biological. Foucault's concept of power is criticised for being overly vague, he also has a tendency to under value the importance of the source of power. ...read more.