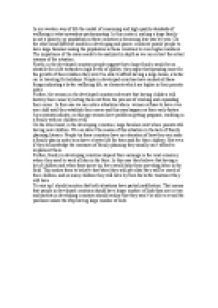 ﻿In our western way of life the model of consuming and high quality standards of wellbeing is what nowadays predominating. In this context, making a large family in not a priority, so population in these countries is becoming less year by year. On the other hand different models in developing and poorer countries pursue people to have large families raising the population in these countries to even higher numbers. The importance of the issue needs to be analyzed in depth se we can extract the actual reasons of the situation. ...read more.

Further, the women in the developed countries advocate that having children will destroy their career by letting them out from the process of working and expanding their career. In this case we can notice situations where women refuses to have even one child until they establish their career and this may happen on their early forties. As scientists indicate, on this age women have problems getting pregnant, resulting in a family with no children at all. On the other hand, in the developing countries, large families exist where parents still having new children. ...read more.

In this case they believe that having a lot of children and when those grow up, they would help them providing labor in the field. This makes them to believe that when they will get older they will be cared of their children, and as many children they will have by then the better treatment they will have. To sum up I should mention that both situations have partial justification. That means that people in developed countries should have larger number of kids than one or two and parents in developing countries should realize that they won?t be able to avoid the poorness unless the stop having large number of kids. ...read more.