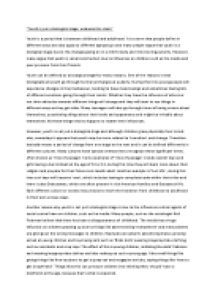 Youth is just a biological stage&quot; evaluate this claim

﻿?Youth is just a biological stage- evaluate this claim? Youth is a period that is between childhood and adulthood. It is a term that people define in different ways and also apply to different age groups and many people argue that youth is a biological stage due to the changes going on in a child?s body and mind during puberty. However, many argue that youth is social constructed, due to influences on children such as the media and peer pressure from their friends. Youth can be defined as a biological stage for many reasons. One of the reasons is that biologically all youth go through hormonal changes at puberty. During this time young people will experience changes in their behaviour, tending to have mood swings and sometimes having lots of different emotions going through their minds. Whether they have the influence of others or not their attitudes towards different things will change and they will start to see things in different ways as they get older. Many teenagers will also go through times of being unsure about themselves, questioning things about their looks and appearance and might be irritable about themselves. ...read more.

Many people, such as the sociologist Neil Postman believe that there has been a disappearance of childhood. The media has a huge influence on children growing up due to things like adverts being ?everywhere? and many adverts are giving out the wrong messages to children. Examples are adverts advertising make up being aimed at young children and toys being sold such as ?Bratz dolls? wearing inappropriate clothing, such as miniskirts and crop tops. The effect of this is young children, imitating the dolls? fashions and wearing inappropriate clothes and also makeup at such a young age. Also small things like giving things like free vouchers to get a spray tan and magazine articles, saying things like ?how to get a boyfriend?. Things likes this can pressure children into thinking they ?should? have a boyfriend at the age, because that?s what is expected. Peers also have an influence on children becoming a ?youth?. Even though peer pressure is known to largely to effect teenagers it also affects younger children. Many high street chains releasing clothing aimed at children as young as 8, like short tops, mini skirt. ...read more.

Another example is the law, laws are different in various societies. Giving people different rights and responsibilities, might make people feel older, by being able to legally do certain things. For example, in England you can drive at 17, while in many American states you can drive at 16. Also, in England people can legally drink alcohol at 18, while in most of USA, the law states you have to be 21. By giving them that legal responsibility, someone who can legally drink alcohol might be seen as ?an adult?, not by society, but by other people their age. In conclusion, youth is not just a biological stage, because although children will go through many hormonal changes in puberty, however youth can be said to be a socially constructed stage of life, due to things like the law and the rights and responsibilities that it gives us and also due to the influence of things such as media and peer pressure, which have to debates of whether children have a loss of innocence, as they have contributed to children ?growing up? so fast. ...read more.

An excellent piece of work arguing effectively that ?youth? is not just determined biologically. The examples given against this argument were very good due to their relevance and the fact they evidence the writer?s wide knowledge of this area. There was just one area if confusion, regarding the statement that ?youth? can apply to different age groups. The writer needs to add a little more detail to this to make the intended meaning clear. Other than that, I thought this was a well-written and well thought out essay.
5/5