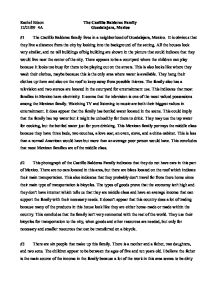 #1        The Castillo Balderas family lives in a neighborhood of Guadalajara, Mexico.  It is obvious that they live a distance from the city by looking into the background of the setting. All the houses look very similar, and no tall buildings of big building are shown in the picture that could indicate that they would live near the center of the city. There appears to be a courtyard where the children can play because it looks too busy for them to be playing out on the streets. This is also looks like where they wash their clothes, maybe because this is the only area where water is available. They hang their clothes up there and also on the roof to keep away from possible thieves. The family also has a television and two stereos are located in the courtyard for entertainment use. This indicates that most families in Mexico have electricity. It seems that the television is one of the most valued possessions among the Mexican family. Watching TV and listening to music are both their biggest values in entertainment. It does appear that the family has bottled water located in the scene. This could imply that the family has tap water but it might be unhealthy for them to drink. They may use the tap water for cooking, but the bottled water just for pure drinking. This Mexican family portrays the middle class because they have three beds, two couches, a love seat, an oven, stove, and a china cabinet. This is less than a normal American would have but more than an average poor person would have. This concludes that most Mexican families are of the middle class.

#2        This photograph of the Castillo Balderas Family indicates that they do not have cars in this part of Mexico. There are no cars located in this area, but there are bikes located on the roof which indicate their main transportation. This also indicates that they probably don't travel far from there home since their main type of transportation is bicycles. The types of goods prove that the economy isn't high and they don't have internet which tells us that they are middle class and have an average income that can support the family with their necessary needs. It doesn't appear that this country does a lot of trading because many of the products in this house look like they are either home-made or made within the country. This concludes that the family isn't very connected with the rest of the world. They use their bicycles for transportation to the city, when goods and other resources are needed, but only for necessary and smaller resources that can be transferred on a bicycle.

#3        There are six people that make up this family. There is a mother and a father, two daughters, and two sons. The children appear to be between the ages of five and ten years old. I believe the father is the main source of the income in the family because a lot of the work in this area seems to be dirty and unclean for a mother to do. The father probably works in the city center with resources, like loading fruit into trucks, or transferring resources throughout the city. He spends many hours a week to keep the family up and pay for living. The mother spends a good portion of her time doing housework. She has to get clean water for drinking needs and she has to do laundry. This is obvious because the laundry is hanging up on the roof to dry. She also spends a lot of the time cooking and cleaning around the house. The children go to school and have work and chores to do around the house to help their mother when they are home.

#4        Technology is a big part of Mexican life as far as TV's, but the technology products are not very modern compared to other technology in more developed countries. I would consider mexico to be less developed country after looking at this photo because they do not have computers, internet, or other modern sources that would imply that they are highly developed in technology products. This is well compared to the amount of development with other sources in the country, because they don't have   modern machinery or housing compared to that of the United States.

#5        The children in the family spend their week at school and spend their other free time and weekends playing with other children in the neighborhood at the courtyard where they can be safe and away from rough streets. They also have chores and work to do around the house to help keep things up and clean. The women in the family have to do a lot of housework. They spend a lot of their alone time cleaning the house and doing cooking in order to prepare for when the family is together and to keep the house/apartment nice. When the family comes together at night and the father is home from work, they gather around the dinner table and eat dinner. They also spend most nights watching TV together. The children like to play games, dolls, ride bikes, and socialize with the rest of the neighborhood. The family also has a dog, but it doesn't appear that it is a big part of the family because it is tied up onto a roof and away from the rest of the family. The children do have toys because that's more important than the adults having toys. The adults don't have toys because the family only supports its necessary needs and they don't have the extra money to buy unnecessary items for adult entertainment. They also don't have that much extra time for adult toys anyway.

#6        The most valued possessions for this family is their TV (whole family), stereo (father), Bible (mother), and their bikes (the children). These items prove to be important because they are all located in the portrait and they are used daily. We can tell that they have dinner together every night and watching TV together is most likely a daily tradition. There is no visible indication of religion with this family because no evidence is shown.

#7        The environment shows that the weather is quite humid most of the time and their living environment also proves this because they don't appear to have that many ways of warming up their living areas. This makes it easier for them to live since they only have enough money to get them by. They depend on this weather because they of their income and the resources they use for food. They also need hot weather for the mother to do laundry and be able to hang out the clothing to dry. I would like to know more about the schooling system in this area and what the main types of food are that they eat. I would also be interested in knowing what the father really does have for a job and if they practice and specific type of religion. I also wonder if they are close with the rest of their neighborhood and if they all know each other well.

This student written piece of work is one of many that can be found in our GCSE Work experience reports section.