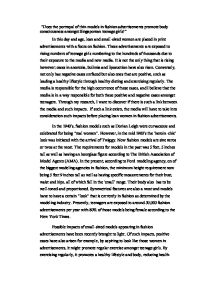 Does the portrayal of thin models in fashion advertisements promote body consciousness amongst Singaporean teenage girls?

“Does the portrayal of thin models in fashion advertisements promote body consciousness amongst Singaporean teenage girls?”

In this day and age, lean and small-sized women are placed in print advertisements with a focus on fashion. These advertisements are exposed to rising numbers of teenage girls numbering to the hundreds of thousands due to their exposure to the media and new media. It is not the only thing that is rising however; cases in anorexia, bulimia and liposuction have also risen. Conversely, not only has negative cases surfaced but also ones that are positive, such as leading a healthy lifestyle through healthy dieting and exercising regularly. The media is responsible for the high occurrence of these cases, and I believe that the media is in a way responsible for both these positive and negative cases amongst teenagers. Through my research, I want to discover if there is such a link between the media and such impacts.  If such a link exists, the media will have to take into consideration such impacts before placing lean women in fashion advertisements.

In the 1940’s, fashion models such as Dorian Leigh were curvaceous and celebrated for being “real women”. However, in the mid 1960’s the ‘heroin-chic’ look was initiated with the arrival of Twiggy. Now fashion models are size zeros or twos at the most. The requirements for models in the past was 5 feet, 5 inches tall as well as having an hourglass figure according to The British Association of Model Agents (AMA). In the present, according to Ford modeling agency, on of the biggest modeling agencies in fashion, the minimum height requirement now being 5 feet 9 inches tall as well as having specific measurements for their bust, waist and hips, all of which fall in the ‘small’ range. Their body also has to be well-toned and proportioned. Symmetrical features are also a must and models have to have a certain “look” that is currently in fashion as determined by the modeling industry. Presently, teenagers are exposed to around 30,000 fashion advertisements per year with 80% of those models being female according to the New York Times.

Possible impacts of small-sized models appearing in fashion advertisements have been recently brought to light. Of such impacts, positive cases have also arisen for example, by aspiring to look like those women in advertisements, it might promote regular exercise amongst teenage girls. By exercising regularly, it promotes a healthy lifestyle and body, reducing health problems in a later age such as heart disease. Another possible positive impact is that teenage girls may follow healthy diet plans, such as cutting down on unnecessary calorie intake as well as consuming healthy food in order to achieve the body shape of the many fashion models.

However, negative impacts on teenage girls arising from the placement of lean women in fashion advertisements are in the spotlight in society. Such impacts have also arisen such as the rising number of teenage girls undergoing plastic surgery by opting for liposuction in order to be thinner according to ABC news. Such surgeries have numerous health risks that accompany it. There is also a rising number in the teenage demographic that have anorexia and bulimia according to a Psychology journal titled, “Body Image, Media, and Eating Disorders”. The rising cases in anorexia and bulimia amongst teenage girls are a dangerous trend and have the highest mortality rate of any mental illness. The placement of thin models in fashion advertisements has been pushed to blame for such negative impacts.

In order to find out if these impacts are related to the placement of fashion models, a survey was conducted that reached out to 30 teenage girls of ages 13 to 17. 83.3% of those participants are not satisfied with the way their body looks. One question in particular came up with a 100% of the participants opting for “no” (See Figure 1). Notable results for other questions are as follows, 83.4% opted for ‘no’ while 16.6% of the participants opted for ‘yes’ in response to the question stated in Figure 2. The survey also asked the polar opposite of Figure 2, results are as follows: 83.4% opted for ‘yes’ while 16.6% chose to opt for ‘no’ as seen in Figure 3.

During the interviews, a seemingly sound reason for the results produced in the survey was tentatively established.  Participants who answered ‘yes’ to the second question were then asked, ‘how many fashion magazines do you read in a month?’ Answers from this group ranged from 4 to as many as 10. Some magazines listed were, ‘Teen Vogue’, ‘Seventeen’ and ‘Vogue’. Such magazines are well-known for being ‘on-top of trends in the fashion world’, the way they display these trends is showcasing certain styles of clothes on models with headlines, “look this way for less!” or “dressing to flatter your body”. Such magazines often include exercising as well as dieting tips ‘to look your best’. These participants were then asked how often they spent time on the internet, with 93.3% of them stating they spent more than an hour on the internet per day. Online, fashion advertisements run rampant across many social network sites that participants in the survey spend most of their time on. Out of these participants, 60% stated that they also visited many fashion websites such as teenvogue.com and seventeen.com, all of which contain and showcase many fashion advertisements and campaigns showcasing thin women modeling what is deemed ‘fashionable’.  Thus, I concluded that those who answered ‘yes’ to the second question were exposed to more magazines and therefore, more fashion models per month.

Also during the interviews, participants were asked, ‘Have you ever wanted a body shape of a fashion model?’ 66.6% answered ‘yes’ while the rest answered ‘no’. Those who answered ‘yes’ were asked whose fashion model’s bodies did they want in particular. Answers ranged from Heidi Klum to Tyra Banks and Kate Moss. Kate Moss in particular was in the center of many controversies surrounding her skinny frame with some saying she was anorexic, and thus deemed not to be a good influence on young teenage girls who were exposed to her numerous print advertisements and fashion campaigns in magazines as well as online. Again, those who were more ‘body conscious’ than others were exposed to more fashion models in magazines and advertisements than those who were ‘less body conscious’. Those who answered ‘yes’ were also further asked how they would work toward their ‘goal body shape’. 86.6% of the answers opted for exercising regularly while the rest opted for a healthy diet. Participants were then asked to personally define a ‘healthy diet’, answers then ranged from eating less food, to cutting down on calories and to eating more fruits and vegetables. Thus, the idea that teenage girls have no clear definition of ‘healthy dieting’ was inferred based on the varied answers obtained.

Thus, results from the survey have been linked by a common thread, which is the heightened exposure to fashion models in advertisements, magazines and the internet based on the participants answers to the survey. From the results of the survey, there are both positives and negatives stemming from the portrayal of thin women in the media, from exercising regularly and dieting, for example. However, the results of this research is inconclusive as I have only managed to reach out to a small demographic. In order to make absolutely certain that the portrayal of thin models shown in fashion advertisements that run rampant throughout the world of the media and new media do promote body consciousness amongst Singaporean teenage girls, surveys can be and should conducted on the larger population of teenage girls in order to find out if my results are true for the majority of the population. If it is, those in charge of placing thin women in fashion advertisements and portraying them in the media would have to consider both positive and negative impacts before placing such thin women in the media and new media that are exposed to numerous teenage girls.