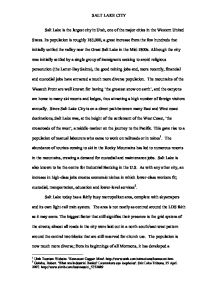 A Demographic, Socioeconomic and Socio-political Evaluation of Salt Lake City

SALT LAKE CITY Salt Lake is the largest city in Utah, one of the major cities in the Western United States. Its population is roughly 183,000, a great increase from the few hundreds that initially settled the valley near the Great Salt Lake in the Mid-1800s. Although the city was initially settled by a single group of immigrants seeking to avoid religious persecution (the Latter-Day Saints), the good mining jobs and, more recently, financial and custodial jobs have attracted a much more diverse population. The mountains of the Wasatch Front are well known for having 'the greatest snow on earth', and the canyons are home to many ski resorts and lodges, thus attracting a high number of foreign visitors annually. Since Salt Lake City is on a direct path between many East and West coast destinations, Salt Lake was, at the height of the settlement of the West Coast, 'the crossroads of the west', a middle-marker on the journey to the Pacific. This gave rise to a population of manual labourers who came to work on railroads or in mines1. The abundance of tourists coming to ski in the Rocky Mountains has led to numerous resorts in the mountains, creating a demand for custodial and maintenance jobs. Salt Lake is also known to be the centre for Industrial Banking in the U.S. As with any other city, an increase in high-class jobs creates economic niches in which lower-class workers fit; custodial, transportation, education and lower-level services2. Salt Lake today has a fairly busy metropolitan area, complete with skyscrapers and its own light-rail train system. The area is not nearly as centred around the LDS faith as it may seem. The biggest factor that still signifies their presence is the grid system of the streets; almost all roads in the city were laid out in a north-south/east-west pattern around the central two blocks that are still reserved for church use. ...read more.

Occasionally an orchard or field is left between buildings, perhaps even one still tended to that produces crops, but the major source of food is now the middle of the state. Salt Lake's road systems, however, were designed to accommodate agriculture-based community- blocks have large square areas and every road leads to any location you may want to go to. Because Salt Lake was established just at the dawn of the second agricultural revolution, it experienced a much shorter period between subsistence farming being dominant and commercial farming being dominant. Technologies to make commercial farming possible were available at roughly the time that Salt Lake became a notable population centre. Therefore, the farms that are now covered by urban sprawl used more traditional and inefficient techniques, while those that still operate today tend towards modern methods. Immigrants brought a sudden jump with the new agricultural innovations from the east. New farms outside of the valley tended to be much larger than would be needed to feed a single family, and thus served as major food sources for the Salt Lake Valley. Salt Lake City itself has almost no farmland left; food is grown in southern parts of the state or elsewhere and imported to local markets for sale. There are now very few people who practice subsistence agriculture, and then they mostly use it as a means to provide themselves with food while selling a larger bulk of the crops at a market. Any people that practice solely subsistence are usually located far away from any concentration of people and do not contribute to the economy or the community at a relevant scale. Commercial agriculture accounts for almost every person's food intake in the city, seeing as there is virtually no useable farmland within the city borders. The downtown area is no longer a market place for food, as the von Th�nen model would have it. ...read more.

I-15 is outlined by a clearly visible light strip extending from the top right corner to the centre of the bottom of the valley54. North is up and slightly to the left, in the direction 1-15 runs. Image from Google Maps55. VIII. Layout of Trax Lines. The north-south line (left, blue) extends south into the suburbs, currently terminating in Sandy, although extensions are planned to service growing communities past Sandy. The right line (red), running mostly east and west, services Central City and terminates after several stops across the University of Utah campus. The central station, marked with 'T', is the Transfer station right in the middle of the modern business district. In this way, the many employees of the University of Utah who live in the suburbs can make use of both lines to go from their home to work every day without contributing to congestion56. General boundaries of cities are marked with bold lines; the sections marked 'University of Utah' and 'Centre City' are part of Salt Lake City. IX. Theoretical Development Plan for West Salt Lake. These few areas were selected as starter-districts for new development to take root in and spread outward from. The Orange area denotes an easily accessible area between two major roadways already in existence, making it an ideal place for new businesses to take hold and develop. The rightmost red area would suit this new business district as the residency for its workers. If it were to be developed by large companies in large sections, it would likely attract highly educated workers who would contribute to both areas' economic development. The left red area would function as yet another extension for businesses to cluster (at the area around the red dot). Between this small-scale retail centre, for businesses that cater directly to individuals like clothing stores and restaurants, and the open-space park, this area would also attract rings of suburban development around them, extending in a linear pattern along the blue line, which could be both an extension of Trax and a widening of main streets from the central city. ...read more.